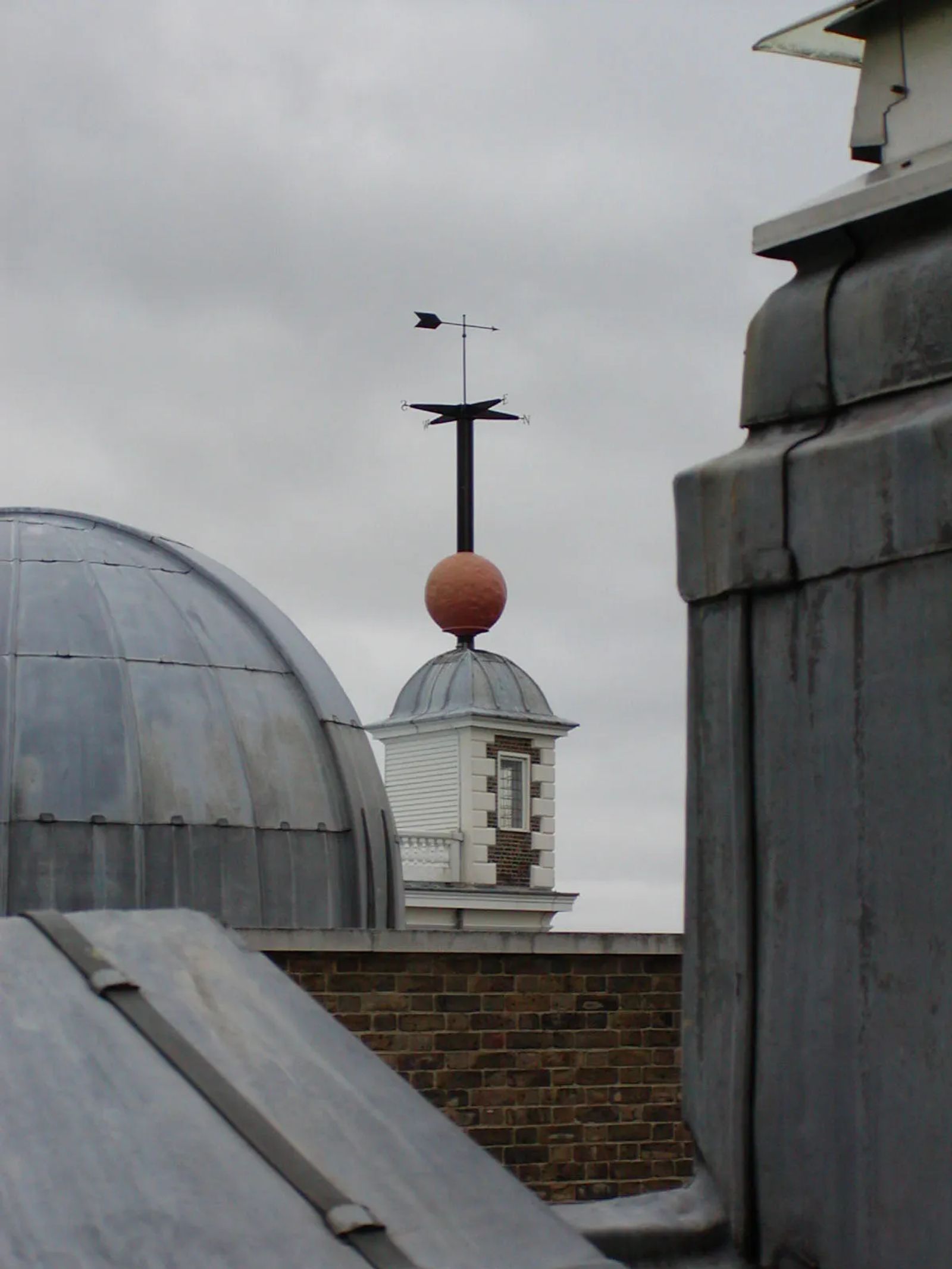 Location: This Hidden Gem is located near the intersection of 51.478 north latitude and the prime meridian, in Greenwich, UK. (see the Clue Me! Map).

For decades, this innocuous red ball was the center of attention in London, once a day, every day. And even though it was 25 miles inland from the coast, it was one of the most important navigating tools for British ships at sea, no matter where they were the world. How can that be, you ask? It starts with the fact that this is a timepiece of extraordinary precision.

Viewed here from the ‘back,’ it appears to be a misplaced Christmas ornament. But viewed from the ‘front,’ the ball is visible for miles, placed as it is at the top of the Flamsteed House, which is at the top of a hill overlooking London to the west, and the Thames River to the north.

Beginning in 1833, here is the sequence that would play out, day after day, decade after decade. At about 12:55 each day, people all over London, and captains and navigators aboard ships on the Thames, would gradually turn their attention to the ball. At exactly 12:55 the ball would slowly rise, reaching the top of the pole at precisely 12:58. There it would stay for two minutes and zero seconds, patiently waiting for everyone with a watch (or a ship’s chronometer) to look its way. At 1:00, on the nose, the ball dropped, and all the watchers checked their timepieces.

The exact timing was controlled by the Greenwich Observatory Master Clock, which was the most accurate clock in the world at that time.

Now, back to this ball being a navigation tool. In 1675, the Greenwich Observatory was built in order to use the stars and planets to determine the time. This was done specifically to keep British ships from becoming lost while at sea.

Here’s the short explanation. Navigators aboard ship used star charts to determine their location. Pick any star, for example Sirius, the brightest star in the night sky. If Sirius is directly overhead at midnight, at the Greenwich Observatory, it will be ‘lower’ in the sky the further you move east or west from Greenwich. How much lower is extremely well defined. A navigator could measure the angle from the horizon to Sirius at midnight wherever they were, and calculate their distance from the Prime Meridian to within a fraction of a mile.

Key words here are ‘at midnight.’ If your clock is off by 3 seconds, your position will be off by about a mile. Off by a minute, the error is 20 miles. Off by 5 minutes, the error is 100 miles.

Thanks in large part to this innocuous red ball, navigators had an answer when their captains asked “where are we?”

Go ahead and drop the ball

This red ball has dropped precisely at 1:00 pm, since 1833, and has been used to synchronize numerous clocks.