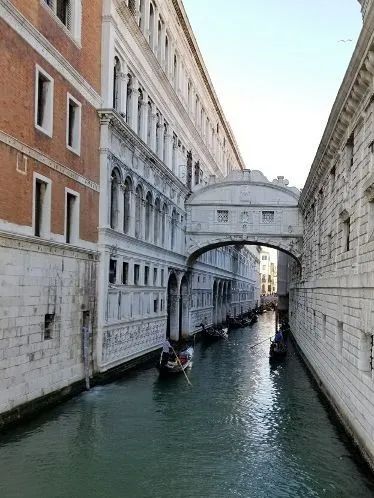 Location:  This hidden gem is located over the Rio de Palazzo o de Canonica in Venice, Italy (see the Clue Me! Map).

The Bridge of Sighs is a beautiful bridge made of white limestone with two decorative stone-barred windows on either side. It's the only covered bridge in Venice. Inside the bridge are two separated corridors connecting interrogation rooms in the Doge's palace to the "New" prison. One corridor for prisoners and guards, and the other for everyone else. It was probably covered so that prisoners couldn't jump over the side and swim to freedom.

As you look at the Bridge of Sighs, you can just make out ten mascarons (masks) along the lower arch. Mascarons are both decorative and functional. As in, they are not only compelling to look at, but they also keep away evil spirits! In fact, the words mascaron, mask and mascara are related. Mascara was also originally applied (in ancient Egypt) as a technique to scare away evil spirits. (The words mascaron and macaroni may seem related, but it’s really quite a stretch)

Back to the mascarons. Since this bridge was used to convey criminals from the courthouse to the jail, nine of the ten faces on each side express despair, reflecting how the prisoners undoubtedly felt as they crossed. Only one of the masks is smiling, perhaps representing the rare acquittal.

The Bridge of Sighs

Why sigh? Is it because the bridge is so beautiful, people sigh when they see it? Is it so romantic that lovers kiss under it at sunset while the bells of St. Mark's Campanile toll so they will have eternal love? Or is it because prisoners sighed as they crossed knowing they were walking from freedom into the despair of prison?

Villainous pickpockets vs. travelers. How can the traveler ever win?!? But now the hero steps in, with a lopsided grin. 130°® satchels are here to protect your good stuff.