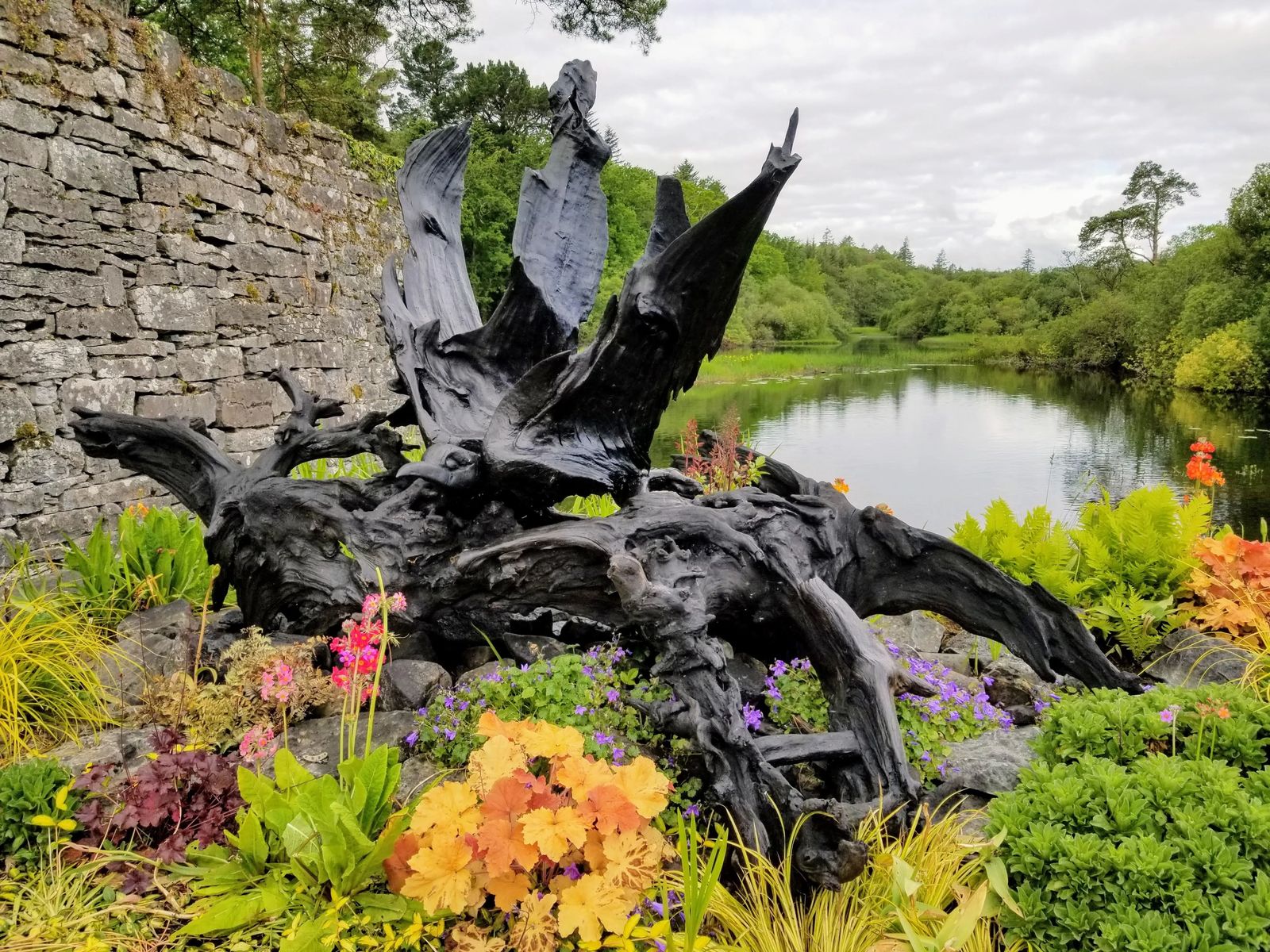 Location: This hidden gem is located in Cong, Ireland (see the Clue Me! Map). Imagine you’re in Ireland, about 5,000 years ago. Oak, yew, and pine forests were much more common than today. There was a constant turnover, older trees dying and younger trees growing in their stead. But if you were walking in those forests, you wouldn't have seen a bunch of old dead trees lying around. These forests were damp and moldy, so dead trees rotted quickly, disappearing within about 20 or 30 years.

This sculpture is made of 'bog wood.' This tree grew in Ireland, about 5,000 years ago. But while its neighbors succumbed to fungus, it did not. How could this happen?

Simple. It got mossed!

You see, some of these trees grew on the edges of bogs. If they fell away from the bog, fungus and insects quickly took hold and munched away. But, if they fell into the bog, they landed in stagnant water, which was acidic and lacking oxygen … not to mention, inhospitable to wood-eating insects and fungi.

Instead of rotting, the wood began to petrify. Wood contains chemicals called ‘tannins’ (used to ‘tan’ animal hides into leather). Iron and minerals in the bog water would slowly permeate the wood, binding to the tannins. This process caused the wood to become darker and darker, but also to become extremely hard, as the minerals filled the voids in the wood.

The final piece of the puzzle is lots and lots of moss, accompanied by copious amounts of heather, and some water-tolerant lichen thrown in for good measure. These organisms love the moist and acidic bog, and moss doesn't even need soil to grow. An old moss dies, and a new moss grows right on top. It peats and repeats … about an inch of peat moss builds up every ten years … until you’ve got several dozen feet of peat.

In the last hundred years, give or take, peat harvesting for fuel really took off. People dug down further than ever, uncovering this ancient wood.

Since the wood is on its way to becoming a fossil, it is hard and not inclined toward decay. This sculpture should be around for a good long time. And bog wood does make a nice (ultra)hardwood floor!

The oldest bird on the block

This sculpture is made from bog wood. Wood that has been preserved in a bog and that is on its way to being fossilized. It is dark because iron and other minerals bind with the tannins in the wood.