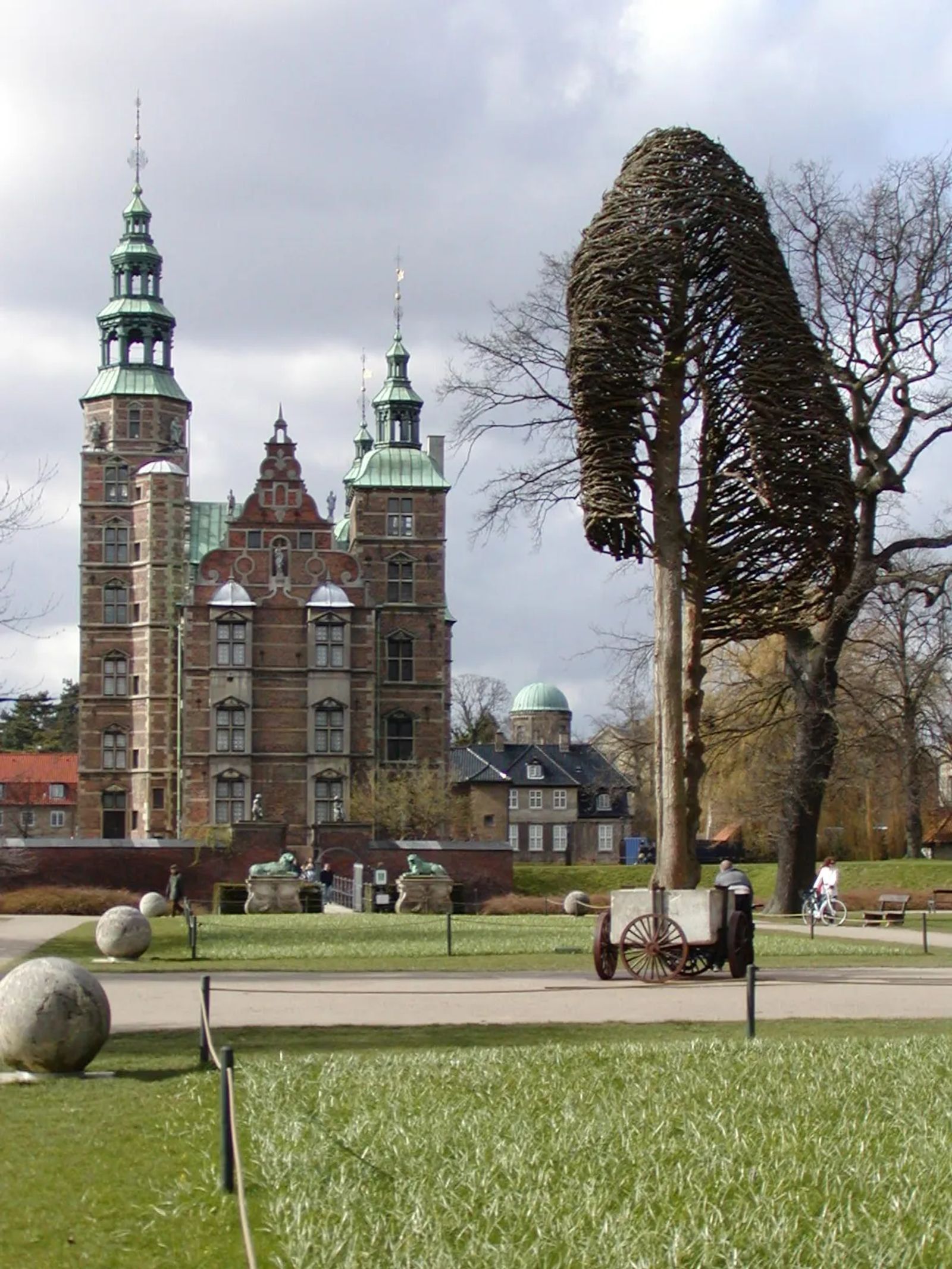 Location: This hidden gem is located across the moat from Rosenborg Castle, and also inside that moat, in Copenhagen, Denmark (see the Clue Me! Map).

The castle and gardens were built in the early 1600s, when Christian IV, King of Denmark and Norway, and Duke of Holstein and Schleswig, decided he wanted a place out in the country. You might notice that this is right in the middle of modern Copenhagen. By ‘out in the country,’ the king apparently meant outside the city walls, but within spitting distance of same.

Christian IV was very much involved in the design of Rosenborg, and he included several modern (circa 1620) conveniences and creative touches. That tradition is carried on by the growers of the tree in the funny wagon. Rather than ‘moving’ in a direction, the wagon just goes around in a very, very slow circle. This year’s new growth aims towards the sun, which is at a southerly angle even at the height of the summer. Turn it a little next year, and the next, ad infinitum, and you have a twisted tree.

Among the creative touches inside the castle is the clever chair available for use by certain of his guests … hopefully the ones who were fond of jests. This chair was placed in front of a very interesting painting, and the king, with a glint in his eye, might ‘invite’ an unsuspecting guest to take a seat to better enjoy the painting. Sitting down triggered four quick actions. From the arms of the chair, cuffs popped out and secured the wrists. From the chair legs, cuffs popped out and secured the ankles. Then the punch line … a container of water was embedded in the backrest, which poured onto the guest, soaking their pants. And the coup de grâce … as the sodden victim of this prank stood up to slink away, an embedded trumpet sounded from the chair, drawing the attention of all the other guests. (Thanks your highness!)

What goes around, comes around. Perhaps as 'payback' for the ongoing chair trickery, the king had to deal with an undesired side effect of the ‘flushable’ toilet. It was actually quite functional compared with other toilets from that era, with a ladle and cistern used to provide water for flushing. The problem was less with the toilet than with the aforementioned moat. The very stagnant moat. The King’s leavings were flushed into the moat, where they decomposed in their own good time. In the meantime, they provided adequate proof that kingly sewage smelled much the same as the common sewage. This aroma wafted quite thoroughly throughout the castle. (Thanks your highness!)

The impact of the toilet notwithstanding, Christian IV spent many of his happiest days at Rosenborg, and on his death bed, he asked to be moved here so he could die in his favorite castle.

Revolving at a leisurely pace

A unique tree in the King's Garden

A very nice sized tree in a very small planter, which can be turned just enough to make the new branches contribute to a spiral shape.