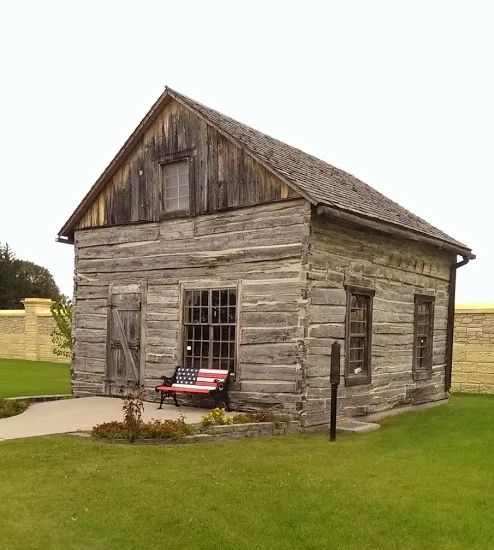 Location:  This Weekly Gem is located near the intersection of Belmont Road and ... Belmont Road (yes, that's right) in Grand Forks, ND (see the Clue Me! Map). Not to worry, if the mail carrier can find it, you can too.

You can visit this cabin because ol' Sanford Cady built it to last. After the Civil War, Cady took work shipping supplies on the frontier. His 1868 project was to build a stage coach station half way between the Canadian border and Fort Abercrombie ... Les Grandes Fourches was the perfect spot. Having spent three brutal winters in the area, Cady was thinking small, compact, tight. Easy to heat, able to withstand strong winds, and enough shelter for passengers to have a meal and a bunk.

People started asking Cady to handle their mail. Being a helpful sort, Cady dug out a cigar box. Incoming letters were placed in the box, and anyone looking for their mail was directed to the box and told to 'help themselves.' Before long Cady made it official, and a corner of his cabin officially became the Grand Forks Post Office.

Growth happens. In just a few years, Grand Forks postal needs outgrew Cady's cabin. So did Cady, having married Sarah Fadden. In short order, the Post Office moved, Sanford and Sarah moved ... and the cabin moved. Some unknown person figured it would make a nice little starter house, and moved it into a neighborhood a few blocks away. In the ensuing years, the cabin was moved at least twice more, until by 1900 it was at Cottonwood and 2nd Avenue. There it stayed, although it was disguised on the outside with siding, and on the inside with slats and plaster.

Time passes. Nobody remembered the history of this little house, which was slated for demolition as part of a revitalization project. But while the neighboring houses succumbed with little resistance, this little guy didn't budge. The disguise was carefully removed, and once the little cabin was uncovered, it was possible to backtrack its history all the way to the summer of 1868. The cabin was moved one last time, joining other historic buildings near the Myra Museum.

This cabin was the first building in Grand Forks, originally located a mile north of here. Ten years later it was moved, and then surrounded by new houses. To 'fit in,' the cabin gained siding on the outside and walls on the inside, and eventually it was forgotten that it was a cabin. After many years, the neighborhood in question was being torn down, but when they got to this little building, it didn't budge. Upon further inspection, the unique structure and history were rediscovered.