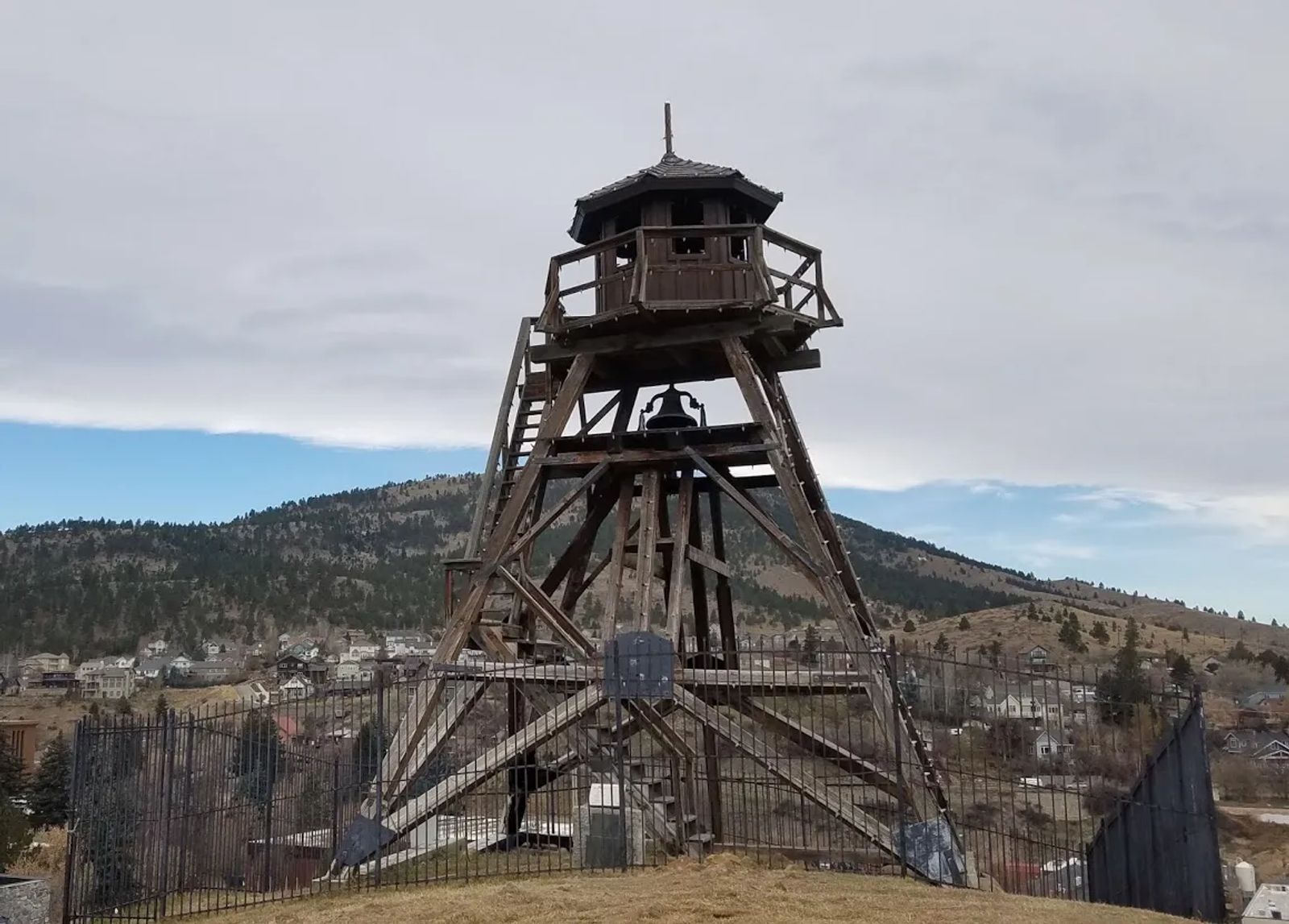 Location: This hidden gem is located just up the hill from Last Chance Gulch, in Helena, MT (see the Clue Me! Map).  This old fire tower, "The Guardian of the Gulch," has been around almost as long as the town of Helena.

In July 1864, gold was discovered near here by four prospectors, who were heading home after striking out in their search for gold near Virginia City. The gulch looked promising, but “This is our last chance, boys”

As it happens, they found the jackpot! Just three months later there were mining shacks, homes and businesses filling the gulch, and Helena was born!

It was a rough-and-ready town, with everything built using whatever was fast and easy. In other words, 100% wood!

With so many wooden structures built so close together, their occupants being warmed and fed using wood fires, you can imagine the amount of unintended combustion. The lack of available water didn’t help. As Helena grew, so did the size of fires, several burning down large swaths of the town.

Helena sped right past the need for bucket brigades and in 1874, just 10 years after gold was discovered in them-thar-hills, it was decided that Helena needed a new fire department complete with fire trucks and a proper fire tower. At the time, a watchman stationed in the tower would ring the bell to alert the fire department, and quick action would hopefully keep the fire from getting out of control.

Having such state-of-the-art technology was something to be proud of in a mining town. When the fire tower was finished, they decided to celebrate and give the bell a ring. The following is an excerpt from the Helena's newspaper, The Daily Independent, on April 4th, 1874:

"The new watchtower was completed yesterday. With a handsome flag floating from its flagstaff, it was the admiration of all who saw it.

The ringing of the fire bell yesterday caused considerable alarm. When it becomes necessary to ring the bell when no alarm is intended it should be muffled."

Oops. We need to have a talk about false alarms, guys.

The Guardian of the Gulch transformed with the times. In 1878 a telephone connecting the tower and the fire department was installed. This allowed the watchman to give directions to the firemen. In 1886 it got a bigger bell! In 1889 Helena installed an electric alarm box system extinguishing the need for the fire tower. And between 1890 and 1930 people began to call it the "bell tower" because the bell was used every day at 8:30 pm for curfew. The earthquakes in 1935 made people wary of the structure and it was almost taken down and sold to Butte.

Fortunately there are those who see the benefit of preserving this piece of Helena's past. It's a pleasing reminder of what it was like living in Helena when the west was young.

This fire tower called "The Guardian of the Gulch" was built in 1874. It is one of just a few structures like it left in the U.S. At one time a watchman sat in the tower and watched for fire - alerting the fire department if he saw a problem.