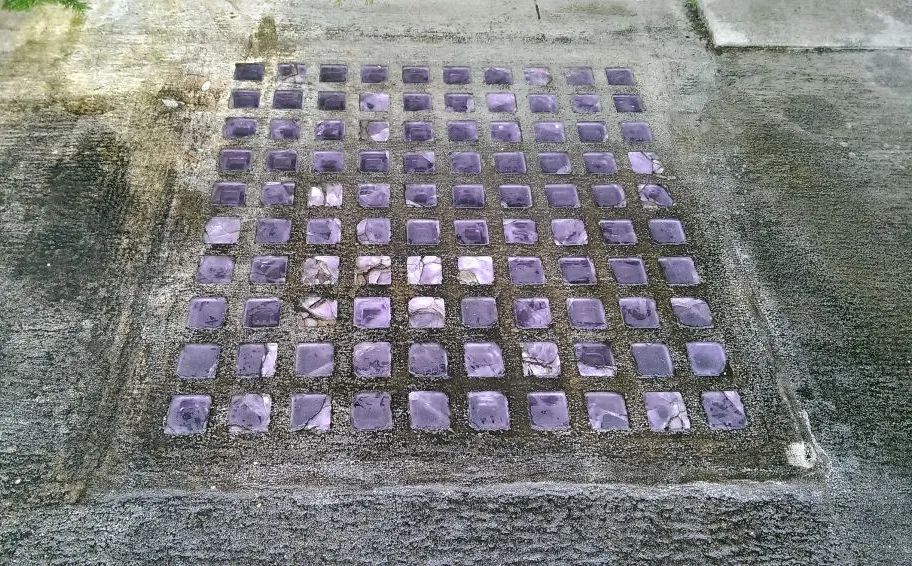 Location: This gem is located at the Hotel Elliot near the corner of 12th St. and Duane St., in Astoria, Oregon (see the Clue Me! Map).

Astoria is one of the few places where you might look with appreciation upon the attractive sidewalks. And while others have taken steps …. to make their sidewalks look nicer (for example the sidewalk poetry in St. Paul), Astoria’s lovely sidewalk décor is also functional.

You see, Astoria has a maze of tunnels just below street level. In 1922, an open flame in one of these tunnels ignited a fire that burnt down much of the city. Being a seaside town, Astorians were familiar with “deck prisms,” glass sky lights that were built into the decks of some wooden sailing ships. These prisms illuminated the decks below, reducing the need for open flame. After the fire, Astoria belatedly adopted the use of glass prisms to help light the tunnels.

Ironically, the pretty purple color was created by a decolorizor! Manganese dioxide was incorporated into glass to make it clear. This same chemical reacts with ultraviolet light from the sun to turn the glass into a lovely amethyst shade.

One might wonder why there are so many poorly lit tunnels under Astoria. That’s a story in itself.

Being a seaside town, Astoria was a convenient place to ‘acquire’ the able-bodied crews needed to sail those wooden ships we mentioned. Unfortunately, many of these crewmen were acquired against their will!

Rather than manhandling the bound and gagged (perhaps unconscious) recruits through town, they were manhandled under the town. These tunnels were built in large part to avoid the inconvenience of kidnapping unwilling sailors in plain view of the populace and law enforcement. The tunnels opened up under the docks, where waiting rowboats would load up the new crew and take them out to the ship.

Anyone down for a trip to Shanghai?

A skylight that gives everything a purple aura.

Purple vault lights in the sidewalk

The glass used in these vault lights let sunlight into the space below.