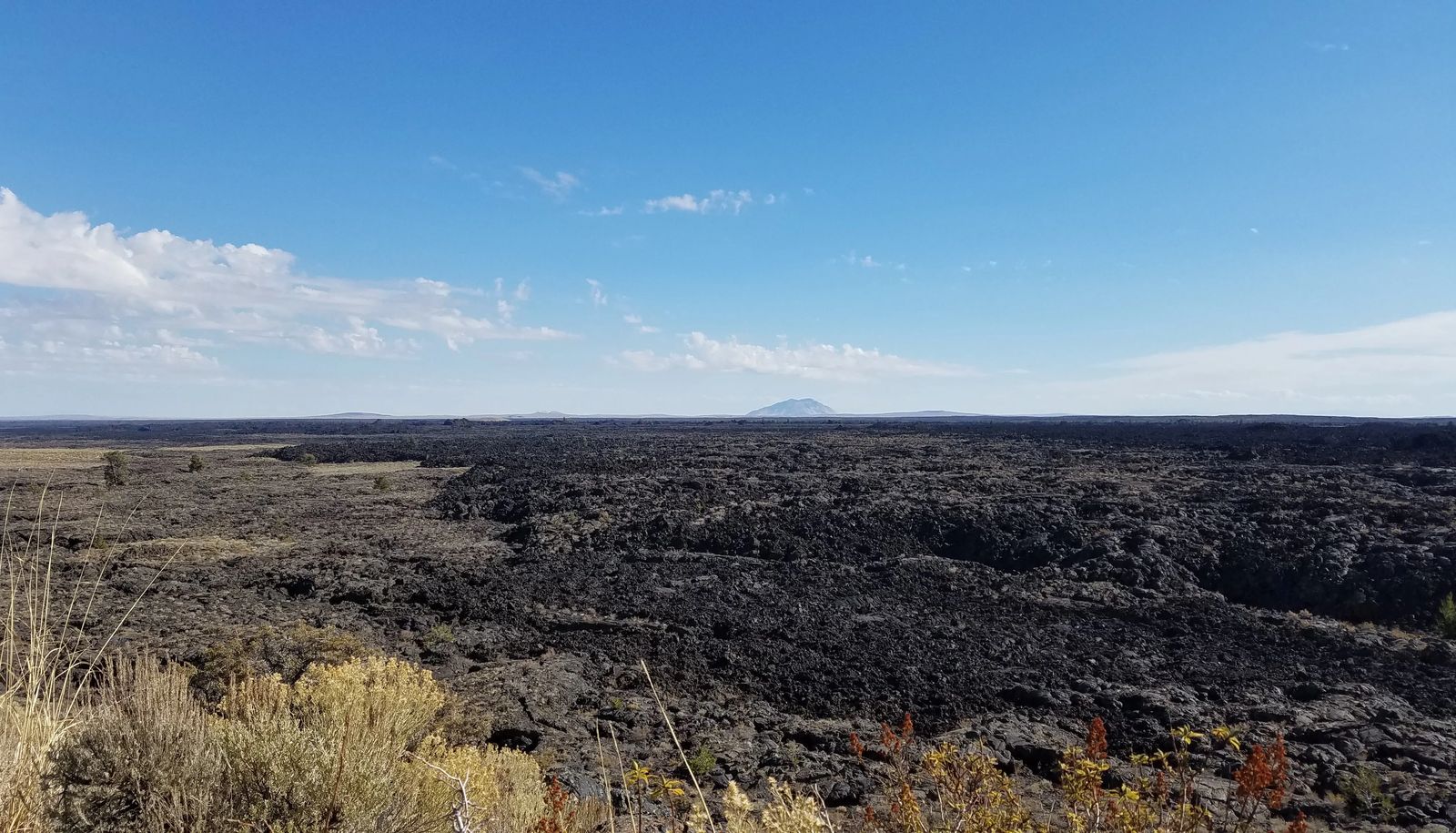 Location: This ‘hidden gem’ is located on the Snake River Plain, between Carey and Arco Idaho (see the Clue Me! Map). ‘Hidden’ may not be the best way to describe a geologic feature as large as Rhode Island, and easily visible from earth orbit. But the old lava flows in the Craters of the Moon National Monument are most definitely a gem, with some secrets hidden in their depths.

Among these secrets are the old Shoshone trails. The ‘Craters’ used to chuckle each spring as the Shoshone made the trek from Pocatello on the east, to the Camas Prairie on the west. Are they going to take the much longer but easier walk to the south? Or are they going to take the ankle twisting and moccasin cutting short-cut, across miles of dry and desolate ‘A‘ā lava? Every year, many of the Shoshone took up the challenge, and the Craters would give an approving nod once they made it through, hot and tired, yet happy and satisfied.

Then there’s the unexplained eruption pattern. The Snake river plain is a veritable pincushion of volcanoes, several, like Craters of the Moon, centered over the “Great Rift.” Here’s the strange part. Every volcano in this region erupted once, and only once. Craters of the Moon erupted 8 times so far, beginning about 15,000 years ago. This is the only volcano with repeated eruptions, and another is due sometime between next week and the 25th century.

While scientists aren’t quite sure the reason behind the repeated eruptions, the Shoshone have lived here for a long time and can explain the last two.

First was the giant snake, miles in length, which resided in the Snake River Canyon. This serpent was trying to nap in the mountains north of the river, but the thunder and lightning from a passing storm kept it from sleeping. The serpent became angry, coiled and squeezed the mountain until it crumbled, causing stones to melt and fire to burst from the earth. The remnants of the fire remain, including the charred bones of the serpent. Lesson learned.

Then there was the agreement with the spirit world. The Shoshone lands were invaded by fierce warriors, who drove them from their homes. The Shoshone asked the spirit world for help. In return for not harming cougars, bobcats, foxes, and wolves, the spirits lifted the Shoshone medicine man to the top of a mountain, whereupon that mountain and surrounding hills ignited and flowed into the valley, killing the invaders in a lake of fire.

It would be fun to live long enough to see the next eruption, if only to learn the true cause behind Craters of the Moon.

I've got to get out of the flow! (see for example, the shiny mailroom scene in "Elf")

A Craters of the Moon lava flow

This is part of the largest lava flow in the 'mainland,' and if you get off the train, I hope you have good boots and knee pads.