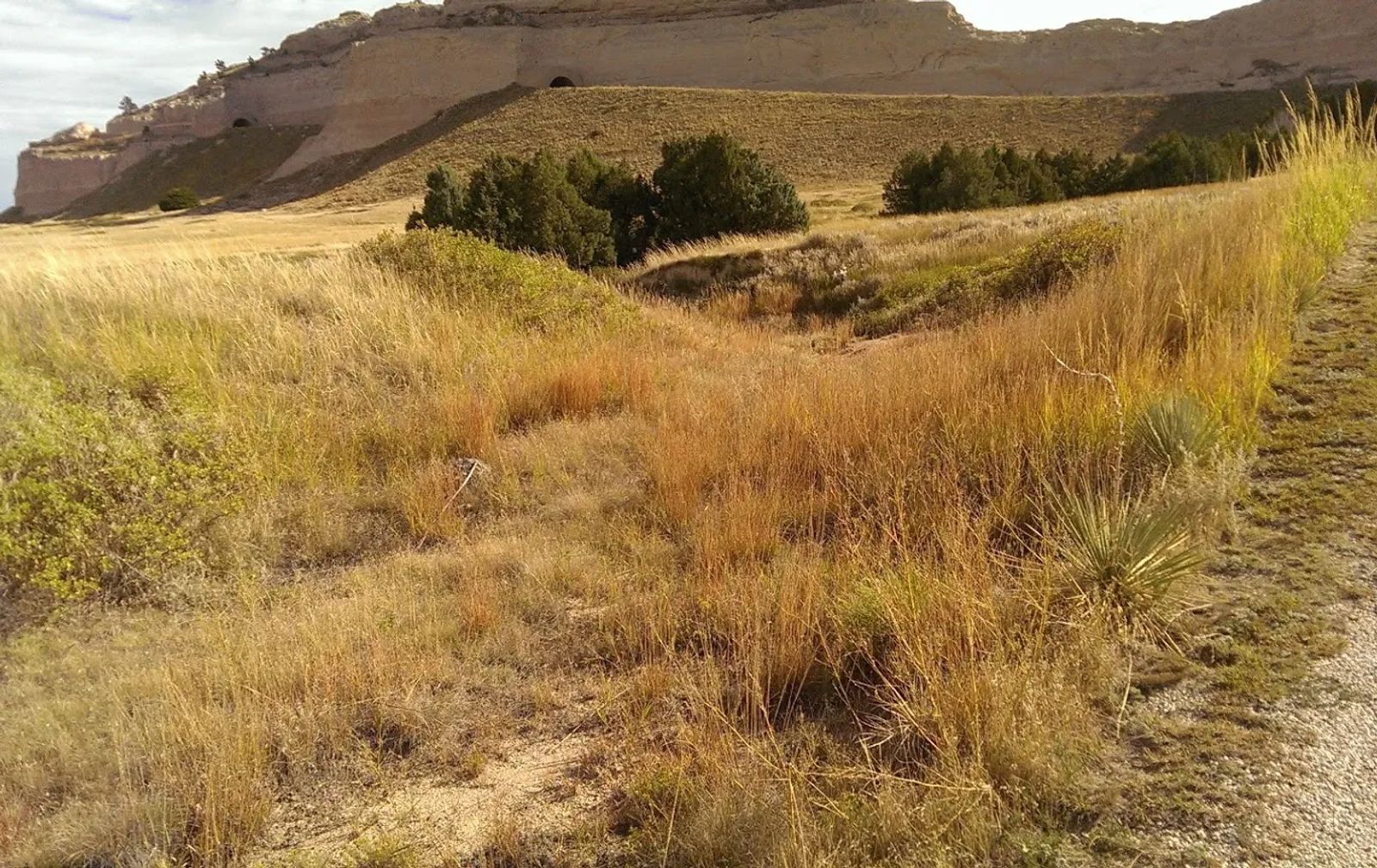 Location: This 'hidden gem' is located about half a mile west of the Oregon Trail Museum and Visitor Center, in Gering, NE (see the Clue Me! Map). From the comfort of an air-conditioned automobile, a trip from St. Louis to Casper, WY might be described as "flat." From the seat of a wagon heading west on the Great Plains leg of the Oregon Trail? Not so much. There was the constant series of rolling hills, creeks, rocks, and other obstacles to navigate. Then there was Scott's Bluff, which was impassable. How could this happen?

It's a matter of timing, really. During the last 5 million years or so, the North Platte River and its tributaries worked incredibly hard to remove rock throughout western Nebraska and eastern Wyoming, and had done a bang up job to make most of this stretch passable. Unfortunately, it didn't quite finish in time for the westward trek. Scott's Bluff is one of the last remnants of the old rock, which has a thin layer of hard rock on top that erodes slowly, resting on a thick layer of soft rock that erodes quickly. This combination produces sheer cliffs that are about as high as that soft rock is deep (call it 400 to 800 feet straight up).

So, interesting if you're a geologist. A pain in the @$$ if you're a settler heading westward! Mile after mile of sheer cliffs standing between you and Oregon. The bluffs come right up against the river, so everyone had to take a long and arduous bypass. Then someone worked out a route through Mitchell Pass, which made a much shorter detour, and much faster return to the water supply provided by the North Platte.

Here we are in Mitchell Pass. There are two details that make this location more interesting than what seems to be, at first glance, a ditch.

First, wagons heading west were usually spread out quite a bit ... what with the heat, the dust, and the lack of bathing options, a little space could go a long ways. The Oregon "Trail" was therefore a series of parallel trails. Heading up the deceptively easy slope to Mitchell Pass, these trails compressed and reduced to just a handful. Second, just as you cross the summit of the pass, you face directly in front of you an impassable gully. The only possibility is to make a U turn to the right, and another to the left, then you're free and clear to the river. At this spot, just before that left turn, every wagon squeezed into this narrow path, going single file.

If you step into the ditch right here, you're standing exactly where every wagon that used this pass, passed. Not to mention, the pony express ponies.

The top of Mitchell Pass, where the wagon ruts merge

The first group through would have climbed up Mitchell Pass, gotten to what they maybe thought was the top, only to face impassable gullies. They had to take a sharp right, slightly doubling back while climbing higher before another sharp left got them clear of the pass. This spot, therefore, forced all the wagons (not to mention Pony Express riders!) into this one, well used path.