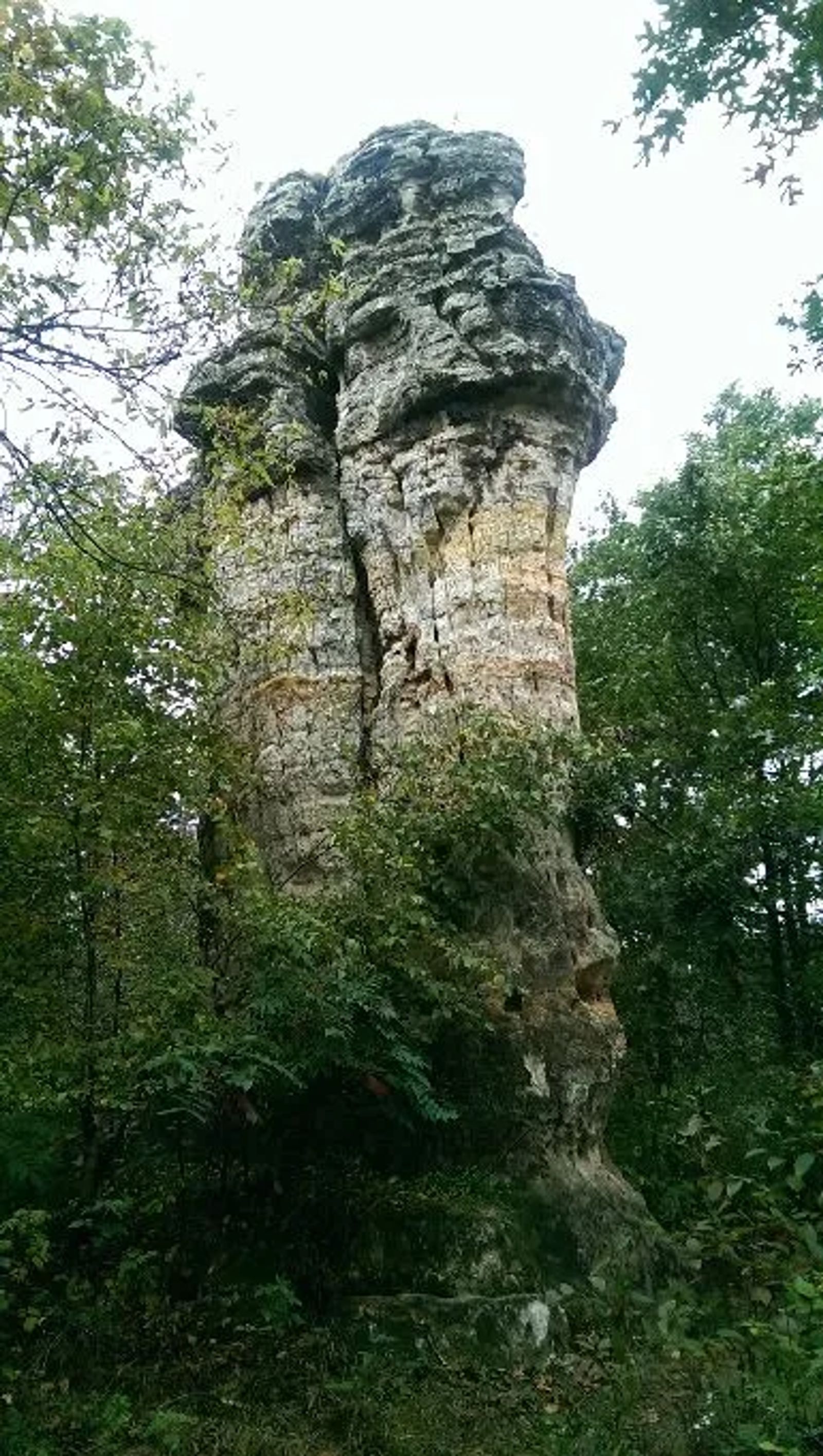 Location: This hidden gem is located just a few steps from Joan Avenue, in the Chimney Rock Scientific and Natural Area (CRSNA), near Hastings, MN (see the Clue Me! Map).

"Walk gently" is written on a sign near this monolith. Even though the pillar has stood for thousands of years, it is relatively fragile. On top of that, the CRSNA has a small population of a rare plant called a "kittentail." So... "walk gently."

This delicate rock formation has a lot more of a story to tell than you might think. In recent times it was a well-known landmark for settlers in the 1800s, and for the Mdewakanton Sioux and Ojibwe tribes before that. But, before it was a pillar, it was just a tiny part of a sandstone mesa that had been minding its own business for about 450 million years.

Then the glaciers came … and went. See the gnarled rock on top? That’s where the ground used to be. You see, before Minnesota was the land of 10,000 lakes, it was the land of one lake. Glacial Lake Agassiz formed when glaciers were beginning to melt but were still very extensive, covering northern Minnestota and most of Manitoba. Lake Agassiz was completely surrounded by ice, and was larger in area than all of the Great Lakes combined. When the ice dams holding Lake Agassiz began to break, the sheer volumes of water that burst forth were unimaginable.

This water rapidly (geologically speaking) carved out the Minnesota River Valley, in part by removing (almost) the entire sandstone mesa. By the time Lake Agassiz drained and the remaining glaciers had melted, Chimney Rock and a couple of similar pillars were the last remnants of the mesa.

Chimney Rock has been described as "the most picturesque and perfect example of columnar rock weathering in Minnesota," inspiring visitors to walk gently, avoid stepping on kittentails, and listen to the stories these formations tell.

A spire to be revered

This pillar began forming 14,000 years ago. The sandstone was eroded away mostly by melting glacier water. It is rare to see a sandstone pillar this tall still standing in this area.