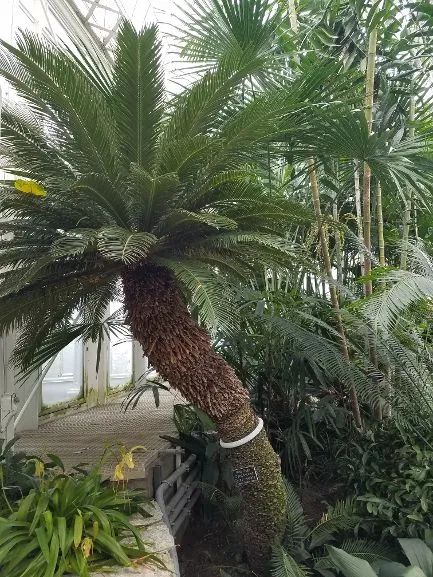 Location:  This hidden gem is located in Como Park Conservatory, (an especially nice place to visit during the winter) in St. Paul, MN (see the Clue Me! Map). The King Sago is a cycad - that's a "prehistoric tree" to you and me. Cycads were indeed around during the Jurassic period, when the dinosaurs roamed the earth.

These are very hardy trees that have evolved to tolerate a variety of climates and conditions. Different species can survive in deserts, rain forests, and swamps; on sand and rocks; in poor oxygen; under full sun or full shade; in salty soils; ... and, you betcha, some can even survive a Minnesota winter (indoors, of course)! They have adapted to our changing world for at least 200 million years.

The King Sago cycad is native to southern Japan in the Ryukyu Islands. It is a popular plant for both commercial use and as a landscape plant, though very slow growing ... the tree pictured here has grown less than 6 feet in 100 years. And while it won't replace wheat any time soon, cycads are used to produce sago (a non-gluten flour or starch).

Here's something you might not know. Being widely used as a decorative plant in homes and yards, and since it can be made into a food product, you might be surprised to learn that it is terribly poisonous! Most of the plant contains lethal amounts of cycasin, a neurotoxic poison. Children and pets should steer clear of any part of this plant, most especially the seeds produced by the female.

But wait! It's used for food? Yes, dear reader, yes it is. This is how you too could make King Sago muffins: First, scrape out the pith … from the trunk, roots and seeds. Then grind the pith, dry it, and soak it to leach out the toxins. Repeat until all the toxins have been removed – to be tested using your handy dandy mass spectrometer. And there you have it. Flour! For muffins, cinnamon rolls, or your favorite breads!

You age gracefully my liege.

This tree is more than 100 years old! It was one of the original plants placed in the Como Conservatory in 1915. There are two of them flanking the door as you leave the main conservatory and make your way into the fern room. It's often called a Sago Palm because it looks like a palm, but it's not a palm! It's really more closely related to a conifer. If you look closely, you can see little buds growing off the trunk called "pups." 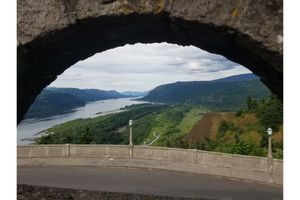