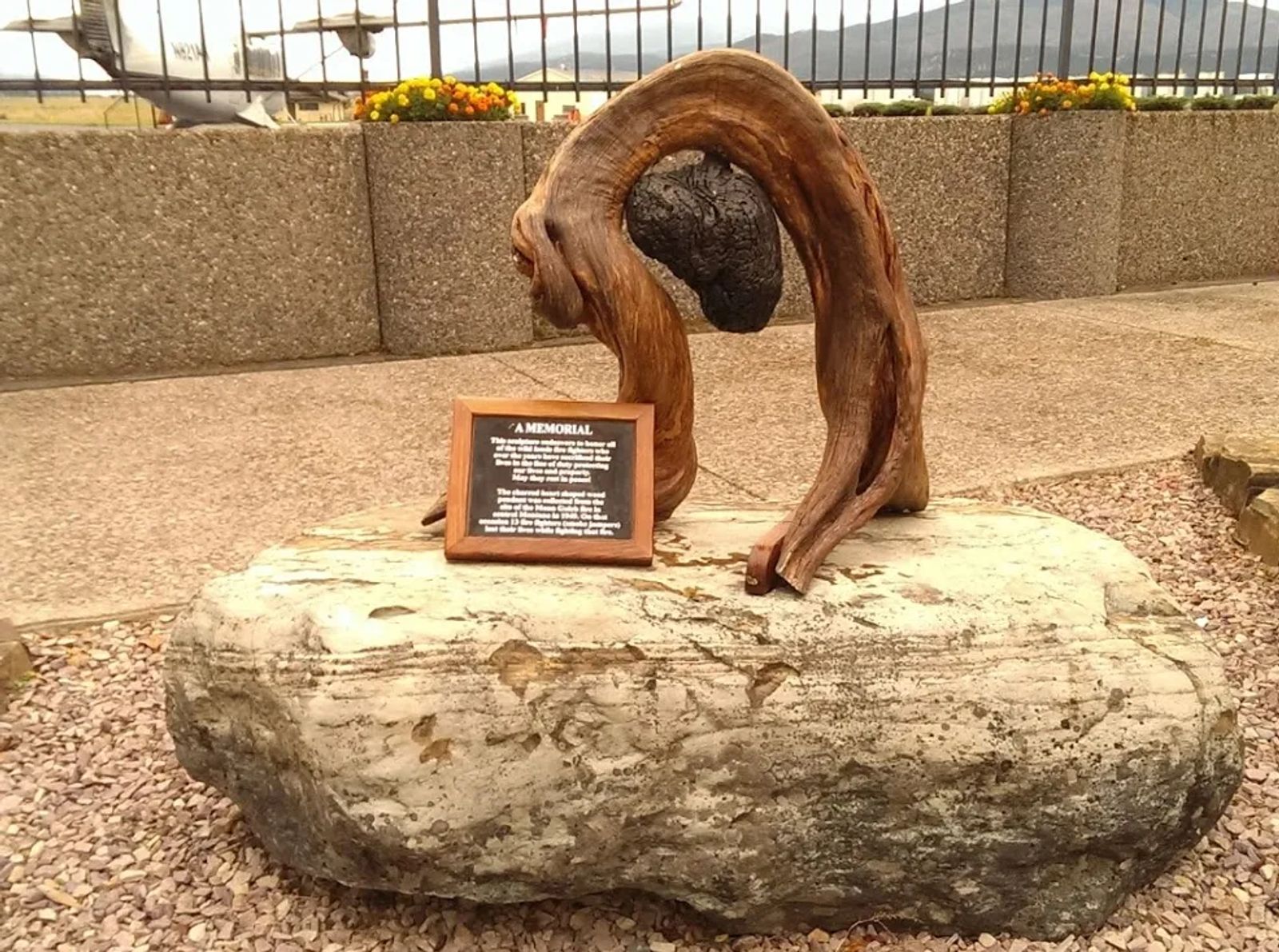 Location:  This hidden gem is located near the Smokejumper Visitor Center, in Missoula, MT (see the Clue Me! Map). The heart-shaped remnant of heartwood is a memorial to all wildfire firefighters who have perished in the line of duty. It was found at the site of the Mann Gulch fire, which burned near Helena, MT, on August 5, 1949, and which took the lives of 12 of 15 smoke jumpers.

As horrifying as this was, lessons were learned that have saved hundreds of lives in the years since. We’ll elaborate, but if you want to read more, there are articles by Richard C. Rothermel and Kathryn Schulz that are easily found online, and a book called “Young Men and Fire.”

So, what happened, and what was learned that has saved so many lives since then?

1. Wildfire is of course impacted by weather.  But fires also change the nearby weather (wind in particular), which can happen very(!) quickly and unpredictably.

The smoke jumpers landed a mile east of the Missouri River, near the top of Mann Gulch. The fire was relatively small and on the opposite Ridge. It was 4:00 in the afternoon. Their equipment was scattered during the drop, and while the crew collected it, smoke jumper foreman Wagner Dodge headed toward the fire to scout. Dodge decided it was too risky to work on the fire from the ridge, and instead they should cut it off from below.

His jumpers had collected their equipment by 5:00, and he met them at approximately 5:30, at which time they started going downhill on the opposite side of the gulch from the fire … heading toward the Missouri River, where they could come up from the lowest (i.e. “safest”) spot.

Just as the crew began heading down the gulch, winds were gusting and very erratic along the Missouri River, about a mile away. Crucially, and unexpectedly, these winds blew smoldering firebrands nearly half a mile downhill from the main fire, landing directly in the firefighters’ path to safety. In other words, the weather caused this fire to behave contrary to what the highly trained firefighters expected.

Additionally, the updrafts caused by these “spot fires” pulled in air from all around. The hotter they got, the more air they drew in, fanning the flames ever higher. In just a few minutes, these small spot fires climbed into the crown of the forest, and then blew up and out of control.

2. As Schulz points out in her article, “firefighters move downhill quickly, and uphill slowly. Fire does the opposite.”

Of course the firefighters knew this, which is why they were heading downhill to come at the fire from below. But what happens if you find yourself above the fire? The answer is, you need to do something other than run, because you probably can’t run fast enough.

Consider Mann Gulch, as a typical gulch. Near the bottom it’s more level, but the closer you get to the top, the steeper it becomes.

At 5:45, just 15 minutes after the spot fires ignited, the smoke jumpers realized that their path to the river was completely cut off.  They immediately headed back uphill as fast as they could. Their goal was to reach and cross the ridge so the fire would again be above them. The inescapable fact was that as they got closer to the ridge, the hill became very steep, to the point where they had to climb 8 feet up for every 10 feet of horizontal distance. This is the same slope as a typical staircase, and every 10 feet is about one flight of stairs. The firefighters ran up 1500 feet of these “stairs,” in about ten minutes. No matter how fit or fast a person is, they slow down. Meanwhile, the fire is accelerating.

3. Just a few feet of separation from the flames can save you.

At 5:53, the fire was within 500 feet. They were moving out of forest and into grassland, with grass roughly hip height. Dodge ordered everyone to drop packs and tools, and run.

The fire was burning at 1,500 to 1,800 degrees Fahrenheit, and ripping towards the smoke jumpers, covering 100 feet every ten seconds.

Wagner Dodge was “by all accounts, exceptionally competent and taciturn as a tree.”

Two minutes after dropping the packs, Dodge knew they could not outrun the fire. From Schulz’s article:

“Dodge was not an engineer, but he was experienced on the ground, and he estimated that the fire was going to hit him in 30 seconds. And so he did something no one in the firefighting business, including him, had ever done, seen, or heard about before. He stopped running, took out a match, and started a fire of his own. In the superheated fuels and high winds, it burned off a hundred square feet of hillside in the few seconds that he stood there, shouting for his men to join him. Some didn’t hear, some thought he’d gone mad, someone said, “To hell with that,” all 15 continued upward through the gulch. Dodge walked alone through the burning edge of his fire and lay facedown in the fresh blackness it had created. He reckoned his chance of survival at “more than even.” Seconds later, the main fire hit.”

Dodge survived, laying less than 50 feet from the inferno passing nearby. His fire may have also bought the other two survivors the time they needed. Firefighters Sullee and Rumsey turned directly up the side of the gulch, the steepest route, but with Dodge’s burn between them and the conflagration. That pre-burned patch stopped the nearest flames, and they were able to find a gap in the cliff at the top and crawl through to the other side.

A few years ago, over 60 firefighters took refuge in a pre-cleared area. They were on a large fire, and working in an area that was of particularly high risk. When the fire turned on them unexpectedly, all were able to take refuge in this space that had been prepared based on Dodge’s successful experiment. All survived, with only a few minor injuries, whereas the consensus was that all would have died within minutes if not for the pre-burned refuge.

Clearly, not a job for the faint of heart.

A memorial to wild lands firefighters

The center of the memorial is a heart-shaped piece of wood that was recovered from the site of the Mann Gulch fire.