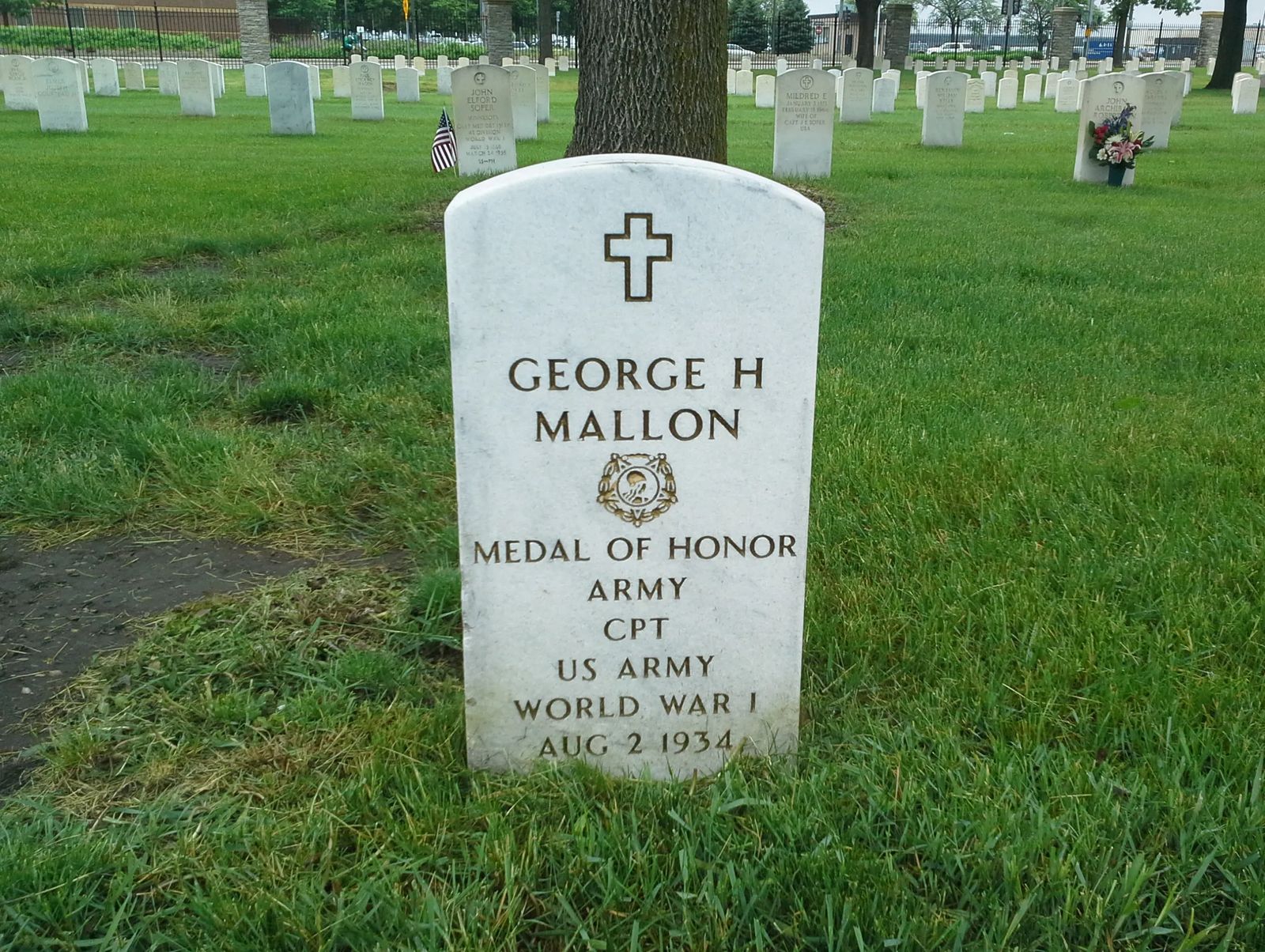 Location: This hidden gem is located in Fort Snelling National Cemetery, Minneapolis, Minnesota (see the Clue Me! Map). Mallon was the first person buried at this cemetery when it was established in 1939. Here’s how that came to pass.

At the age of 40, George Henry Mallon decided to once again become a soldier. He had been a soldier twice before, during the Spanish American War in 1898 and during the Philiippine Campaign from 1899 to 1902. On a side note, he became the boxing champion of the Philippines while serving there, a skill which would come in handy some 15 years later. Mallon had settled down in Minneapolis, becoming an installer of automatic fire sprinkler systems. But when the U.S. entered World War I, he again volunteered to serve.

With age comes wisdom. This time he decided to join up as an officer, and he received his officer training just a mile from here, at Fort Snelling.

A year later he was in France. The morning of September 26, 1918, the Americans were joining in the largest allied offensive of World War I (the Meuse-Argonne Offensive). The fog was as thick as pea soup, and Mallon and 9 soldiers from his company became hopelessly separated from his unit.

There was only one thing to do. Attack!

From Mallon’s Medal of Honor Citation: “Capt. Mallon, with 9 soldiers, pushed forward and attacked 9 active hostile machineguns, capturing all of them without the loss of a man. Continuing on through the woods, he led his men in attacking a battery of four 155-millimeter howitzers, which were in action, rushing the position and capturing the battery and its crew. In this encounter Capt. Mallon personally attacked 1 of the enemy with his fists. Later, when the party came upon 2 more machineguns, this officer sent men to the flanks while he rushed forward directly in the face of the fire and silenced the guns, being the first one of the party to reach the nest. The exceptional gallantry and determination displayed by Capt. Mallon resulted in the capture of 100 prisoners, 11 machineguns, four 155-millimeter howitzers and 1 antiaircraft gun.”

The first of many

The grave site of George Mallon

Mallon was the first person to be buried in the Fort Snelling National Cemetery when it was established in 1939. He died in 1934, was exhumed from his first grave site, and moved here.