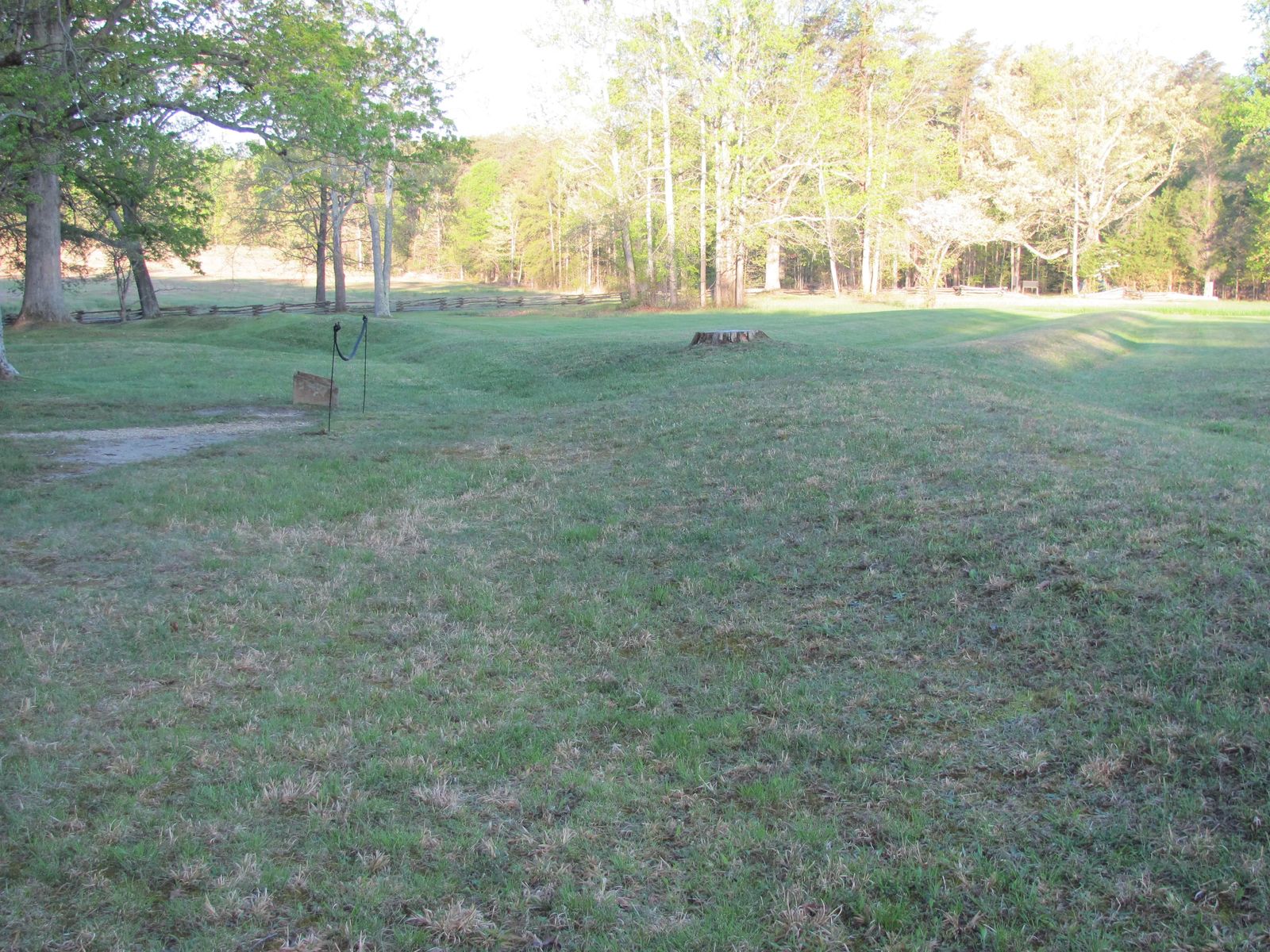 Location: This hidden gem is located at the west end of Bloody Angle Drive, near Spotsylvania, VA (see the Clue Me! Map). The “Bloody Angle.” This was an ‘engagement’ during the Civil War battle of the Spotsylvania Court House. The name tells you more than you probably want to know, but it’s important to remember, and learn from, places such as this.

There are two big stories that come out of this 22 hour long battle. First, it shows the incredible self-sacrifice soldiers are willing to make, just one example of why we say ‘thank you’ on Memorial day. It also shows how easily a mistake by the leaders, even a beloved leader, can waste those lives.

Let’s start with the mistake, by Robert E. Lee.

His Confederate troops had just fought for three days in the Battle of the Wilderness. The Union army, led by Ulysses S. Grant, withdrew from that battle and headed toward Richmond, VA, the Confederate capital. To get to Richmond, you go Spotsylvania. Lee knew this, and successfully raced to beat Grant to Spotsylvania. His troops immediately set to building a long and strong row of trenches and log barriers to protect them during the coming battle.

The trenches followed the high ground, which was good, but in a way that created a “mule shoe” shaped curve in their line. This curve was a fundamental flaw, because this section of the line could be attacked from three sides at once. The Confederate leaders were well aware of this flaw, but decided they could hold this line as long as artillery was available. Lee concurred.

The big trouble started when this crucial supporting artillery was pulled back, shortly before the Union troops attacked. That attack was immediately successful, with several thousand Confederates either captured or on the run. Lee arrived quickly and determined that the “mule shoe” was lost, but that the rest of his lines could hold if they could fortify his center. Building the fortifications would take a day, so he needed to plug the gap, for a day … 24 hours.

The carnage that ensued is hard to believe, and we won’t get into it, other than to say this. Unit after unit was sent into the small gap, amounting to about 300 or 400 yards across, and about 50 feet deep. Union soldiers trying to capture it, Confederates trying to stop them. This went on for 22 hours without letup, and in that time, upwards of 15,000 soldiers were killed or wounded in the Bloody Angle.

In the end, the Confederates simply pulled back to the line they should have started with, and the larger battle continued for another week before neither side won.

A bend in the Confederate trenches on the Spotsylvania Courthouse Battlefield known as the "Bloody Angle."

On May 12, 1864 Union troops of U.S. Grant attacked R.E. Lee's entrenched Confederates at the Bloody Angle during the Battle of Spotsylvania Courthouse. For 22 continuous hours the two sides locked in the war's most intense hand to hand combat. Small arms fire was so concentrated that bullets cut down a large oak tree at the Angle. The fighting bought Lee enough time to build a new line of earthworks which he held until Grant abandoned the field.