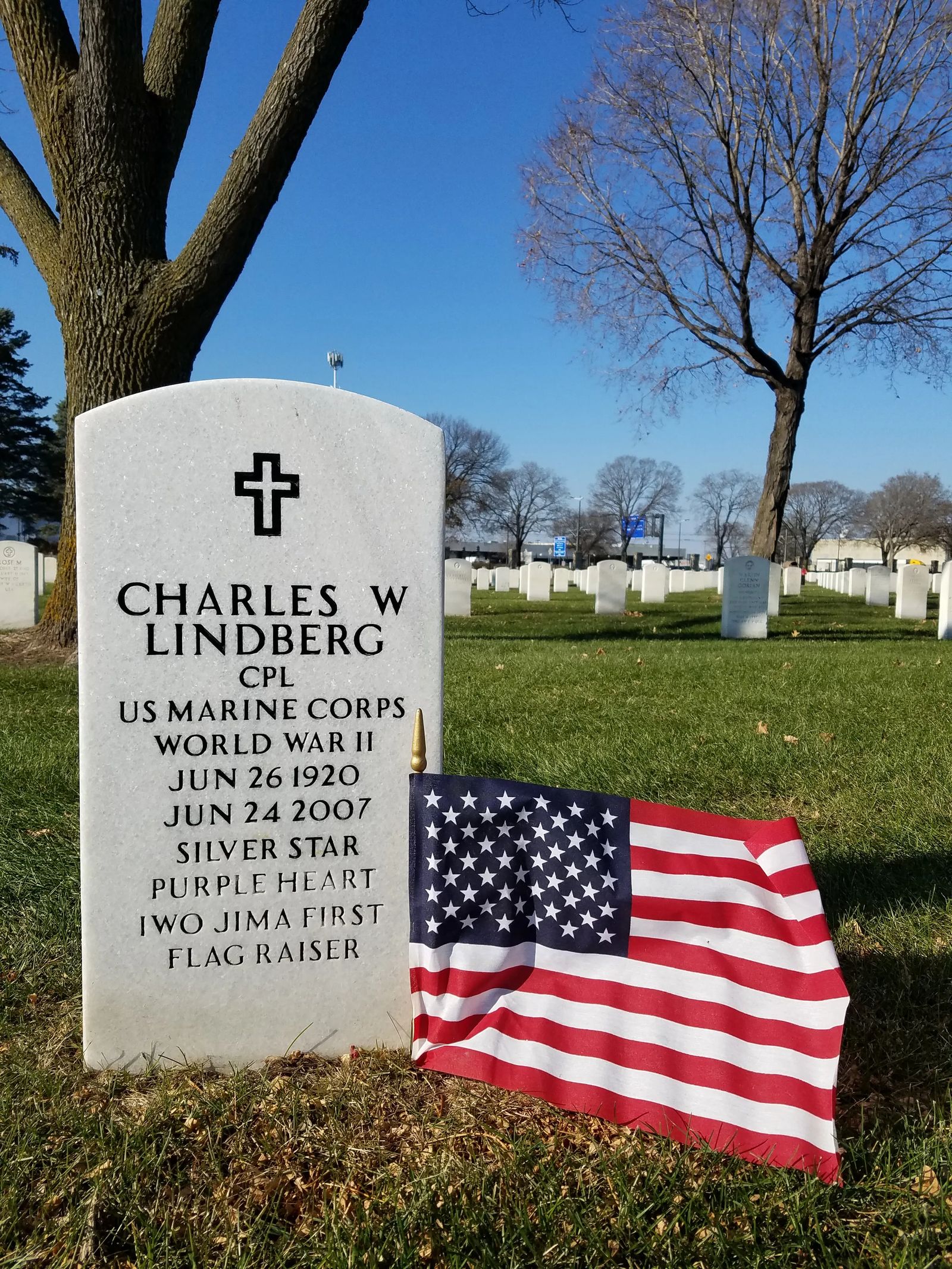 Location:  This Weekly Gem is located on the west side of Mallon Road, in the Fort Snelling National Cemetery, St. Paul, MN (see the Clue Me! Map). You know about the second U.S. flag that was planted on Iwo Jima, the one in the famous photo, the inspiration for the Marine Corps Memorial. Cpl. Chuck Lindberg’s headstone includes a reminder of the first flag, raised four hours earlier, by the first group of Marines to reach the summit of Mt. Suribachi. That first flag was small, hardly noticed back home … but to the thousands of Marines and sailors fighting to capture Iwo Jima, it was a glorious sight!

From Mt. Suribachi, Japanese soldiers could see down and fire on the Marines from the moment they hit the beach. When the Marines came ashore in 1945, Iwo Jima was laced with tunnels, booby traps, and a multitude of interconnected bunkers that covered each other. Marines approaching to destroy one bunker would come under fire from all directions, and destroying one just brought the next one behind it into the fight. While in Japanese hands, Suribachi made every attack even more dangerous.

Suribachi had to fall. And Chuck Lindberg was in the thick of it. It took his regiment three days to cover just a few hundred yards to the base of Mt. Suribachi. On the morning of Feb. 23, 1945, forty-four men led by Lt. Harold Schrier started to climb Suribachi’s northeast side. An audience of thousands of Marines and sailors stole glances to track their progress, until the patrol reached the summit at 10:30 am.

Schrier’s orders were: "If you reach the top, secure and hold it. And take this along." "This" was an American flag from the transport USS Missoula.

According to Lindberg, “two of our men found this big, long pipe … we tied the flag to it, took it to the highest spot we could find, and we raised it. Down below, the troops started to cheer, the ships whistles went off, it was just something that you would never forget. It didn’t last too long, because the enemy started coming out of the caves.”

The flag was fairly small, only barely visible from a distance. Battalion Commander Chandler Johnson sent for a large battle flag - "large enough that the men at the other end of the island can see it. It will lift their spirits also."

Charles W. Lindberg was one of the men in the first group to raise a flag on Iwo Jima's Mount Suribachi.

The historical flag raising photograph (and model for the Marine Corps War Memorial in Arlington, VA) of the U.S. flag being raised over Iwo Jima was actually the second flag raised in that spot. The first flag (raised by Charles W. Lindberg among others,) was considered too small to be seen from everywhere on the island, so a second, larger flag was lifted again. It was this second time that the photographer caught the iconic picture of the flag being raised over Iwo Jima.