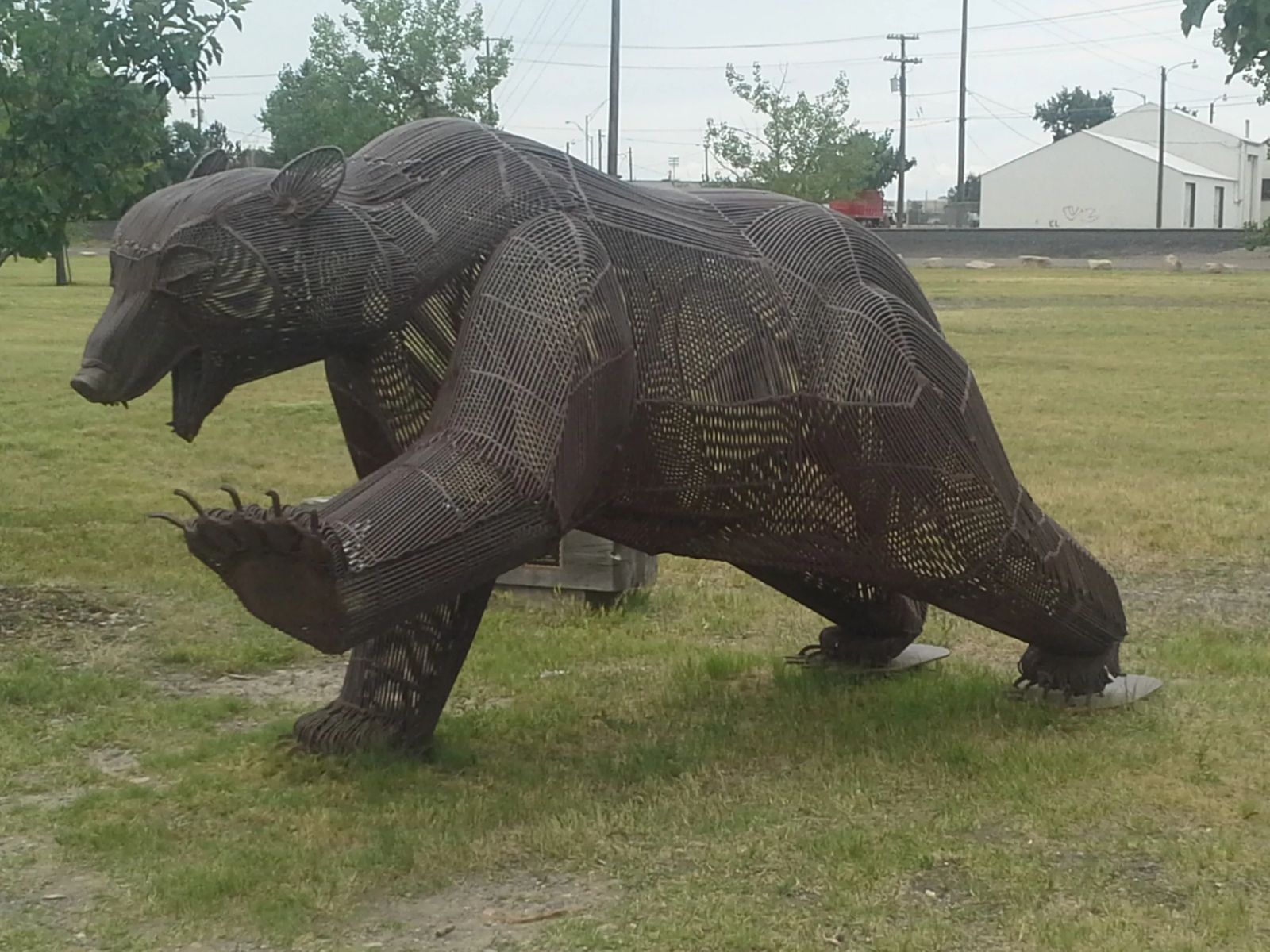 Location: This 'hidden gem' is located next to the Missouri River, near the west end of Sacajawea Island, in Great Falls, MT (see the  Clue Me! Map). The life-sized grizzly bear sculpture is surprisingly imposing, clearly interested in eating something (or someone). But the story that inspired placing this sculpture right here is a gem as well. 'Bear' with us while we relate events leading to that particular encounter.

Lewis and Clark were heading west in 1805, exploring a route to the Pacific Coast. Leaving Mandan Villages in April of 1805, they had heard about Grizzly bears, but not yet seen one. Lewis's journals describe his journey from over-confident to mortal peril over the course of two and a half months. Three excerpts (original spelling retained):

"Set out this morning at the usual hour; the wind was moderate; I walked on shore with one man. about 8 A. M. we fell in with two brown bear; both of which we wounded; one of them made his escape, the other after my firing on him pursued me seventy or eighty yards, but fortunately had been so badly wounded that he was unable to pursue so closely as to prevent my charging my gun; we again repeated our fir and killed him. ... it is asstonishing to see the wounds they will bear before they can be put to death.  the Indians may well fear this anamal equiped as they generally are with their bows and arrows or indifferent fuzees, but in the hands of skillfull riflemen they are by no means as formidable or dangerous as they have been represented. "

"In the evening the men in two of the rear canoes discovered a large brown bear lying in the open grounds about 300 paces from the river, and six of them went out to attack him, all good hunters; they took the advantage of a small eminence which concealed them and got within 40 paces of him unperceived, two of them reserved their fires as had been previously conscerted, the four others fired nearly at the same time and put each his bullet through him, two of the balls passed through the bulk of both lobes of his lungs, in an instant this monster ran at them with open mouth, the two who had reserved their fires discharged their pieces at him as he came towards them, boath of them struck him, one only slightly and the other fortunately broke his shoulder, this however only retarded his motion for a moment only, the men unable to reload their guns took to flight, the bear pursued and had very nearly overtaken them before they reached the river; two of the party betook themselves to a canoe and the others seperated an concealed themselves among the willows, reloaded their pieces, each discharged his piece at him as they had an opportunity they struck him several times again but the guns served only to direct the bear to them, in this manner he pursued two of them seperately so close that they were obliged to throw aside their guns and pouches and throw themselves into the river altho' the bank was nearly twenty feet perpendicular; so enraged was this anamal that he plunged into the river only a few feet behind the second man he had compelled take refuge in the water, when one of those who still remained on shore shot him through the head and finally killed him; they then took him on shore and butched him when they found eight balls had passed through him in different directions."

June 14, 1805. Lewis v. Grizzly, one on one. Right about where this sculpture stands ... Lewis had walked several miles already, determined to find the uppermost of the 'Great Falls' that dominated this stretch of the Missouri, and which they needed to portage around in order to proceed.

"nor was I disappointed on my arrival at it's summit. from hence I overlooked a most beatifull and extensive plain reaching from the river to the base of the Snowclad mountains to the S. and S. West; I also observed the missoury streching it's meandering course to the South through this plain to a great distance filled to it's even and grassey brim; another large river flowed in on it's Western side about four miles above me and extended itself though a level and fertile valley of 3 miles in width a great distance to the N. W. rendered more conspicuous by the timber which garnished it's borders. in these plains and more particularly in the valley just below me immence herds of buffaloe are feeding. ... after feasting my eyes on this ravishing prospect and resting myself a few minutes I determined to procede as far as the river which I saw discharge itself on the West side of the Missouri. ... I decended the hills and directed my course to the bend of the Missouri near which there was a herd of at least a thousand buffaloe; here I thought it would be well to kill a buffaloe and leave him untill my return from the river and if I then found that I had not time to get back to camp this evening to remain all night here there being a few sticks of drift wood lying along shore which would answer for my fire, and a few sattering cottonwood trees a few hundred yards below which would afford me at least a semblance of a shelter."

[blogger's note: From the grizzly sculpture, you can look east to the hill Lewis just descended, and south to the mouth of the tributary where he was headed.]

"under this impression I scelected a fat buffaloe and shot him very well, through the lungs; while I was gazeing attentively on the poor anamal ... , expecting him to fall every instant, and having entirely forgotton to reload my rifle, a large white, or reather brown bear, had perceived and crept on me within 20 steps before I discovered him; in the first moment I drew up my gun to shoot, but at the same instant recolected that she was not loaded and that he was too near for me to hope to perform this opperation before he reached me, as he was then briskly advancing on me; it was an open level plain, not a bush within miles nor a tree within less than three hundred yards of me; the river bank was sloping and not more than three feet above the level of the water; in short there was no place by means of which I could conceal myself from this monster untill I could charge my rifle; in this situation I thought of retreating in a brisk walk as fast as he was advancing untill I could reach a tree about 300 yards below me, but I had no sooner terned myself about but he pitched at me, open mouthed and full speed, I ran about 80 yards and found he gained on me fast, I then run into the water  the idea struk me to get into the water to such debth that I could stand and he would be obliged to swim, and that I could in that situation defend myself with my espontoon; accordingly I ran haistily into the water about waist deep, and faced about and presented the point of my espontoon, at this instant he arrived at the edge of the water within about 20 feet of me; the moment I put myself in this attitude of defence he sudonly wheeled about as if frightened, declined the combat on such unequal grounds, and retreated with quite as great precipitation as he had just before pursued me."

As an aside, in light of the rising frequency of human/grizzly bear conflicts, hikers, hunters, and fishermen are advised to take extra precautions and keep alert for bears while in the field. The official guidance:

"We advise that outdoorsmen should wear noisy little bells on their clothing so as not to startle bears that aren't expecting them. The bell noise allows bears to hear them coming from a distance and not be startled by a hiker accidentally sneaking up on them. This might cause a bear to charge. Visitors should also carry a pepper spray can just in case a bear is encountered. Spraying the pepper into the air will irritate the bear's sensitive nose and it will run away. It is also a good idea to keep an eye out for fresh bear scat so you have an idea if bears are in the area. People should be able to recognize the difference between black bear and grizzly bear scat. Black bear droppings are smaller and often contain berries, leaves, and possibly bits of fur. Grizzly bear droppings tend to contain small bells and smell of pepper."

A real run in with a bear behind!

A grizzly bear sculpture. A memorial for a stellar human being and science teacher, Don Kenczka. Don and his wife, Lois, loved to go on walks along this part of the Missouri River. Lovely, quiet walks...

Meriwether Lewis (of Lewis and Clark fame) also walked along the Missouri here ... then sprinted into the river, with a huge grizzly close behind! This statue marks the spot of his grizzly encounter. Lewis had just shot a buffalo, so his gun was empty when he and the grizzly saw each other. With no cover or trees to climb, into the river he went, then turned to fend off the bear with only a spear! Luckily for Lewis, and the expedition, the grizzly decided not to get wet that day.