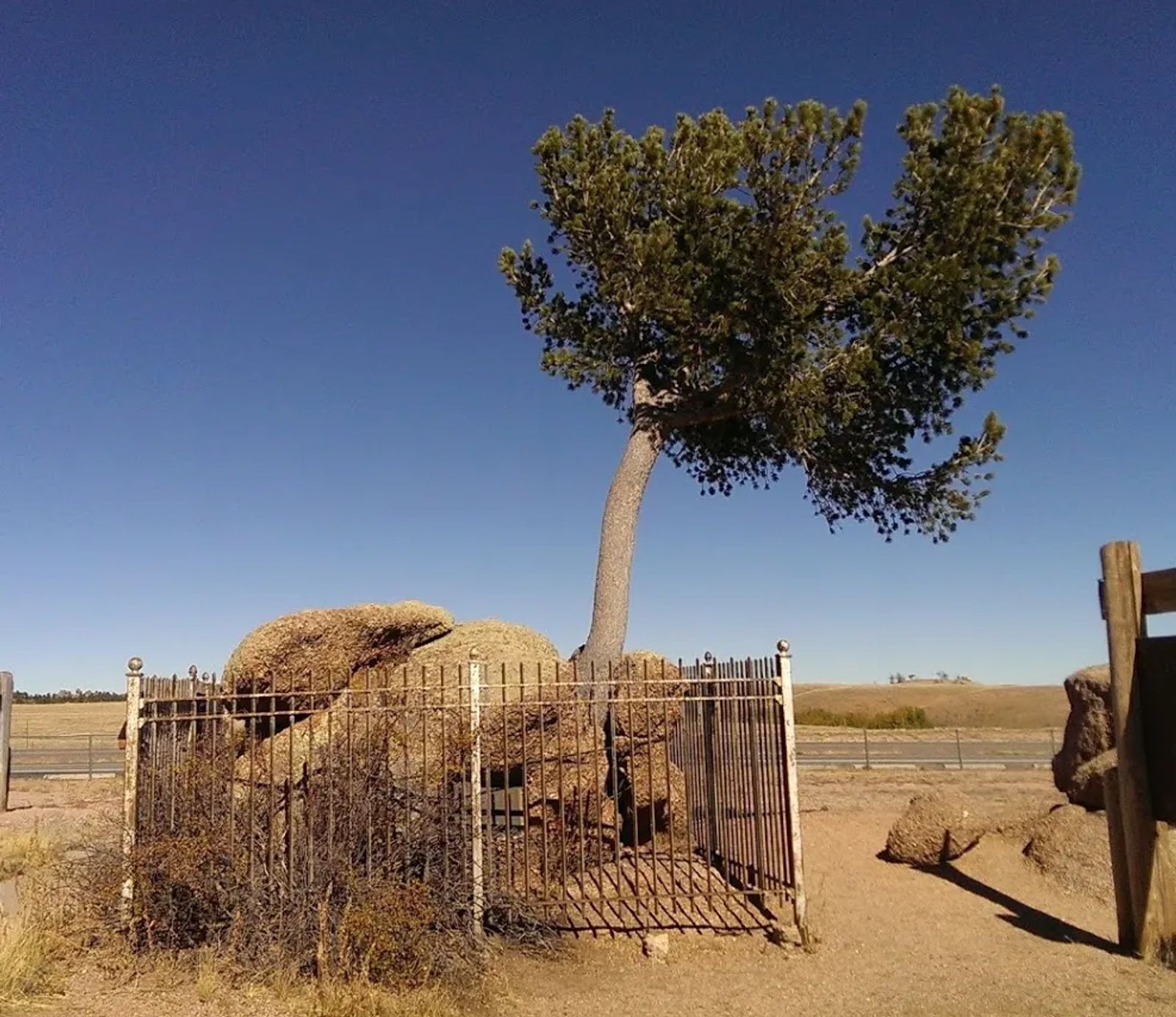 Location:   This 'hidden gem' ekes out an existence in the median of I-80, about 15 miles east of Laramie, WY (see the Clue Me! Map). Before you shed a tear for this poor tree, and the obvious hardship it has endured squeezing water from a rock, think about its long and enjoyable life.

First of all, even though small, this little fella is pretty old. Chances are, it's at least 500 years old, maybe 1000, maybe more. Limber pine's live up to 2000 years. It was clearly large enough, and the rock was broken enough, to be an impressive sight when the first railroad came through 150 years ago ... impressive enough that they rerouted the tracks so passengers could see this industrious tree up close. Since then it has been seen by a lot of east - west traffic.

But for hundreds of years before the railroad, it would certainly have been a draw to the north - south traffic. Consider. This tree is in the ancestral homeland of the Arapaho nation, and is a landmark at a very interesting spot. The tree is on the north edge of a plateau that is covered in grassland ... wide open prairie. To the south, west, and east, is grass. Immediately to the north, the land slopes steeply downward and opens into an area of amazing and massive rocky outcrops and pine forests, called Vedauwoo (vee-da-voo).

Vedauwoo is the Arapaho "Land of the Earth-Born Spirits." It was a spiritual place to which they journeyed each year. Imagine, decade after decade, they break down camps in northern Colorado and head to Vedauwoo. It's a pretty long and tiring walk of several days.

The first sign that they've arrived is this little tree growing out of a rock, poking up from the surrounding grassland. Their destination is still out of sight, but they know now that it's just over the hill.

They walk a little straighter and their pace picks up. They would likely adjust their path, drawn to this tree ... come close, take a look, and gain inspiration from the strength to slowly and patiently split the rock. Now they're ready to visit the Earth-Born Spirits.

Rocky existence for a limber pine

The tree in the rock

This limber pine (latin name is Pinus flexilis) was here in 1868, and the Union Pacific laid their tracks a few yards south just so passengers could see this brave little tree on its rocky perch. Limber pines live a long time, 1500 years being pretty old, but possible. So although small, this could have been a shady stop for hundreds of years, perhaps enjoyed by Native Americans visiting nearby Vedauwoo.