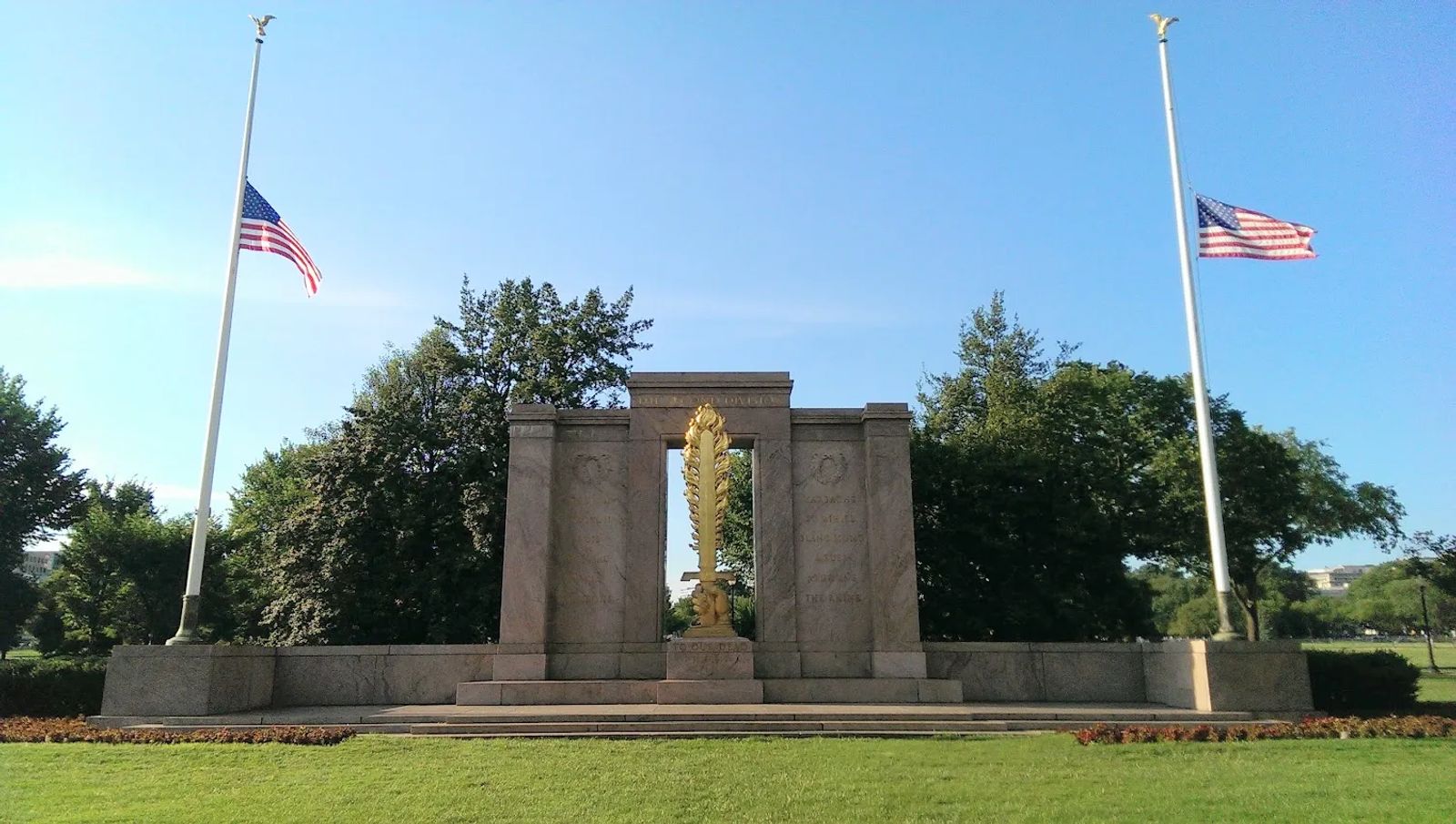 Location: This hidden gem is located just southwest of the Ellipse, in Washington, DC (see the Clue Me! Map). It's the monument to the U.S. Army's 2nd Division, which is the only Army division that was commanded (for a time) by a Marine, and which included a full brigade of Marines (for a time).

It's hard to grasp the situation in France during the Spring of 1918. Four years of trench warfare behind them with no end in sight. Millions(!) of German, Austro-Hungarian, French, British, and Russian soldiers were dead, many millions more wounded, and the fighting included vast amounts of artillery and mustard gas that simply destroyed and terrified. The war was at a precarious stalemate in 1917, where a truly decisive victory by either side could easily lead the other to sue for peace.

The Germans gained a temporary advantage because they were able to employ an additional 50 divisions in France, due to the surrender by Russia in 1917. With those reinforcements, Germany launched an all-out offensive, a portion of which broke through the French lines and gained 30 miles very quickly ... worse yet, they had mostly open road between them and Paris, just 60 miles away.

The U.S. had recently entered the war, but troops were arriving piecemeal. The army needed a 2nd Division (right now!), but didn't have enough guys. Thus the 4th Marine Brigade was cobbled together with Army infantry, artillery, and machine gun units, and the hastily assembled 2nd Division was rushed into the path of the Germans.

The Marine brigade was positioned to protect the town of Lucy, just west of a place called Belleau Wood ... a small hunting preserve area less than a mile across. The French were retreating through the Marine lines, and urged the Marines to fall back and dig trenches. The famous retort: "Retreat? Hell, we just got here!"

The Battle of Belleau Wood is far too complex to describe in any detail here. Suffice it to say that there were attacks and counter attacks over this same square mile for three weeks before the Germans were finally pushed out for good, and the threat to Paris eliminated. The Marines were the most heavily engaged throughout this time, and suffered nearly 2,000 dead and nearly 10,000 wounded. But after three desperate weeks, they stopped the German advance, perhaps preventing a game-changing victory by the Germans.

Four days later, the Commanding General of the French 6th Army officially renamed Belleau Wood to be "Wood of the Marine Brigade." But on the maps, in the books, and in the History of the 2nd Division, it's always called Belleau Wood.

This somewhat out-of-the-way memorial to the Army's Second Division has a lot of history behind it. It's worth looking into this history before your visit so you more fully appreciate their valor.