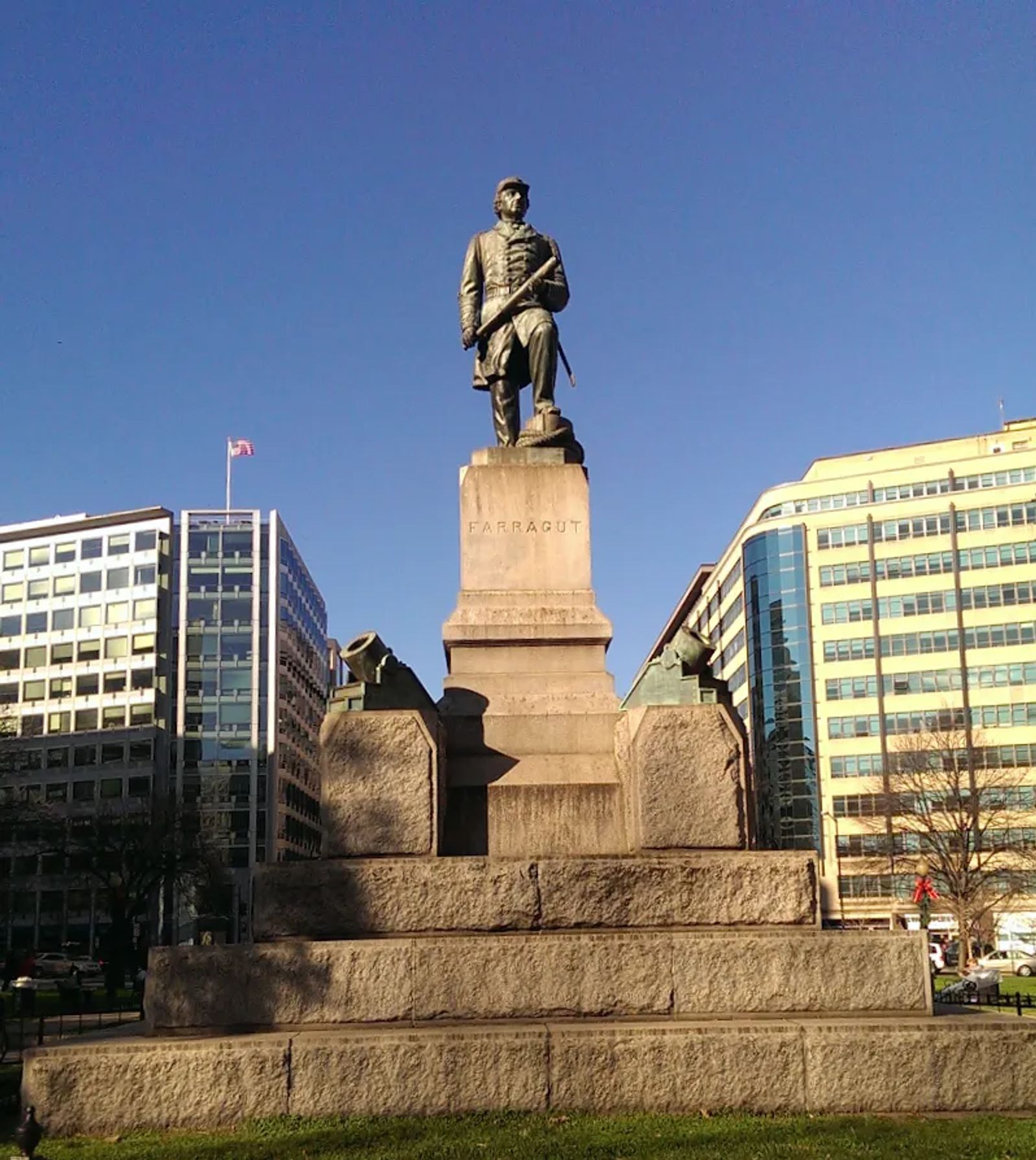 Location:   This 'hidden gem' is located three and a half blocks north northwest of the White House, in Washington, DC (see Clue Me! Map).  Admiral Farragut’s statue is one of a very few that gaze directly upon the White House. Farragut earned this honor over two impressive time periods. There were the six decades of remarkable naval service. And then there were the 5 minutes one August morning when he grabbed defeat by its scrawny neck, and pulled victory from its clenched jaws.

Farragut’s plan to capture Mobile Bay (Alabama) from the Confederates required his ships to move full speed through a narrow channel that had been kept open for supply ships. To the west were masses of high explosive floating mines (the ‘torpedoes’ in Civil War lingo) and to the east were the soon to be blazing cannons of Fort Morgan. Everything depended on moving so fast that the Fort Morgan guns couldn’t be brought to bear with accuracy, and keeping as far east as possible to stay out of the floating mine field, any one of which could easily sink a ship.

Farragut’s ships had formed two tightly packed columns and headed at full speed toward the open channel. So far, so good. His flagship was second in line on the left (up against the torpedoes). But soon after the Fort Morgan cannons opened fire, the lead ship veered westward, away from the fort, but directly into the torpedoes, with the rest of the fleet following right behind (their orders being to follow exactly behind the ship in front in order to stay out of the mines!). The lead ship quickly struck a mine and went down in seconds.

At this moment, the Confederates had the battle as good as won. The Union fleet was surrounded by torpedoes, slowing down to try and avoid them, and on the verge of becoming sitting ducks to the Fort Morgan gunners.

First, Farragut recognized there was only one possible route to survival (much less victory), and that was forward, as fast as possible. “Damn the Torpedoes! Full speed ahead!” he yelled.

Second, his captain and crew followed orders instantly, surging forward in spite of the likelihood that each second would be their last.

Miraculously, Farragut’s ship successfully cleared the mine field, and the rest of his ships had followed exactly in his wake, making it through as well. In fact, the entire fleet, except for the lead ship, made it through the gauntlet and then soundly defeated the Confederate navy ships that were defending Mobile Bay.

At this time during the Civil War, the Union armies were stymied on all fronts. But Farragut’s severing of the last major supply lane to the Confederacy was like the first domino, soon followed by multiple Union victories and the surrender of the Confederacy just 8 months later.

During the Civil War, Farragut was ordered to capture Mobile Bay, which was blocked by "torpedoes" (floating high-explosive mines, and a major concern ... his lead ship hit one and sank in 30 seconds!). Under fire from cannons on shore, slowing would be disaster. Farragut climbed the rigging to get above the smoke, and headed full speed into the mine field. One ship warned him to slow down, to which he replied "damn the torpedoes!" The rest followed in his wake, miraculously unscathed.