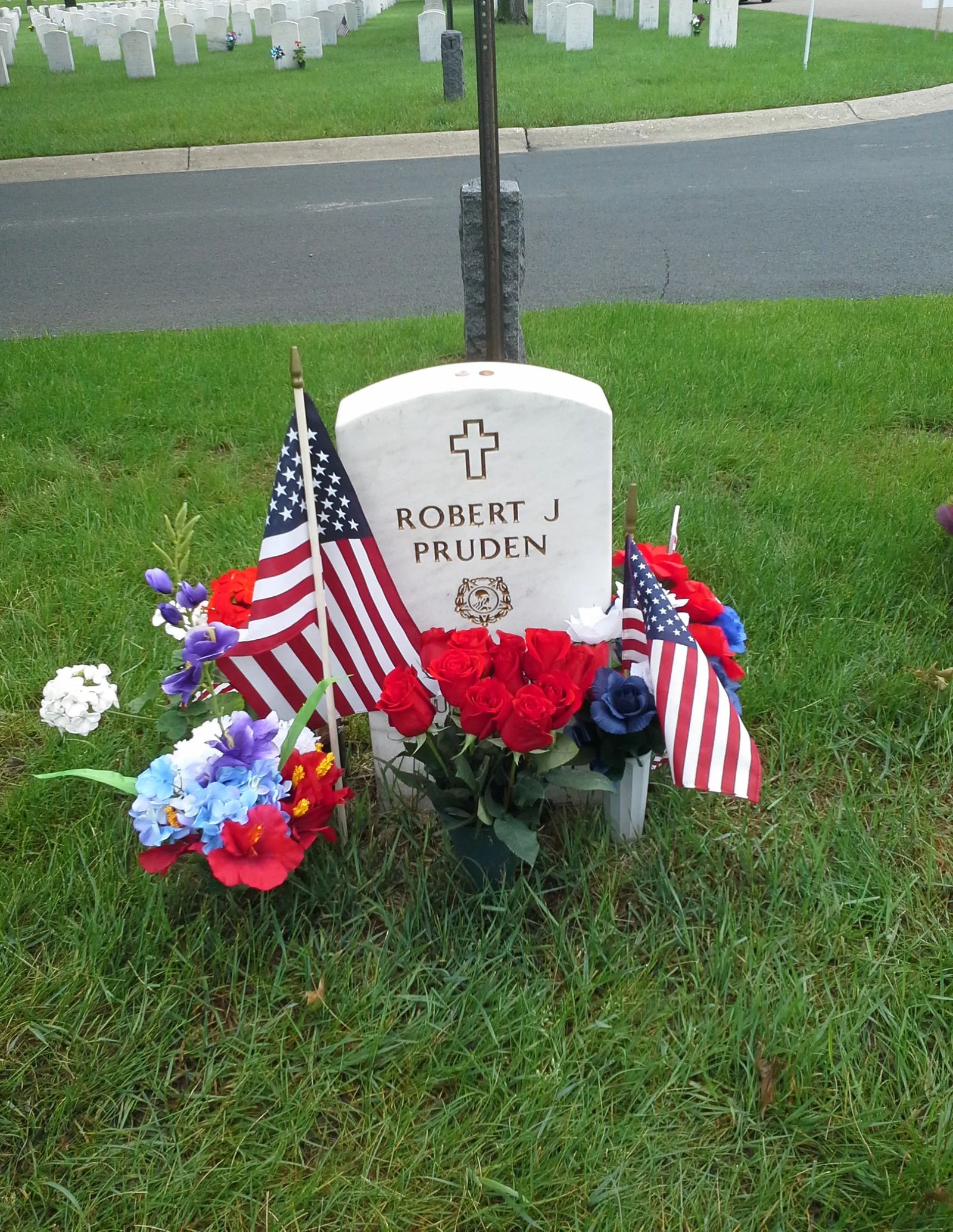 Location:  This 'hidden gem' is located at the intersection of Peterson St. and Second Drive in the Fort Snelling National Cemetery, Minneapolis, MN. To get there, you'll probably take the first left onto Pruden Drive (see Clue Me! Map).

Fort Snelling National Cemetery is truly impressive, with around 220,000 markers, perfectly straight rows as far as the eye can see. This hidden gem is one of those markers. It has the name Robert J. Pruden, and the symbol for the Medal of Honor just below.

The text of his citation (shown below) begins like this: "For conspicuous gallantry and intrepidity in action at the risk of his life above and beyond the call of duty ...".

They got that right.

Old enough to be a junior in college, instead he was in Vietnam, leading a 6 man squad on long-range reconnaissance patrol (LRRP, pronounced 'lurp') far behind enemy lines. They were on their own, so when everything went to hell, there was no quick exit and no cavalry coming quickly enough to make a difference.

Pinned down under heavy fire from two directions with one guy wounded and in the open, it wouldn’t have taken Pruden very long to calculate the odds. As the 20 year old responsible for the lives of 5 others, he clearly decided that he needed to personally do something radical to even things up, and then he did. As a result of his split second decision and actions, his 5 team members escaped a no-win situation.

Somehow words like “gallantry and intrepidity” don’t do the man justice.

Nor does “thank you.”

For conspicuous gallantry and intrepidity in action at the risk of his life above and beyond the call of duty. S/Sgt. Pruden, Company G, distinguished himself while serving as a reconnaissance team leader during an ambush mission. The 6-man team was inserted by helicopter into enemy controlled territory to establish an ambush position and to obtain information concerning enemy movements. As the team moved into the preplanned area, S/Sgt. Pruden deployed his men into 2 groups on the opposite sides of a well used trail. As the groups were establishing their defensive positions, 1 member of the team was trapped in the open by the heavy fire from an enemy squad. Realizing that the ambush position had been compromised, S/Sgt. Pruden directed his team to open fire on the enemy force. Immediately, the team came under heavy fire from a second enemy element. S/Sgt. Pruden, with full knowledge of the extreme danger involved, left his concealed position and, firing as he ran, advanced toward the enemy to draw the hostile fire. He was seriously wounded twice but continued his attack until he fell for a third time, in front of the enemy positions. S/Sgt. Pruden's actions resulted in several enemy casualties and withdrawal of the remaining enemy force. Although grievously wounded, he directed his men into defensive positions and called for evacuation helicopters, which safely withdrew the members of the team. S/Sgt. Pruden's outstanding courage, selfless concern for the welfare of his men, and intrepidity in action at the cost of his life were in keeping with the highest traditions of the military service and reflect great credit upon himself, his unit, and the U.S. Army.

The original Hidden Gem from our Clue Me! map reads like this:

The marker for U.S. Army Ranger Staff Sergeant Robert J Pruden of St. Paul, Minnesota, posthumously awarded the Congressional Medal of Honor for conspicuous gallantry and intrepidity above and beyond the call of duty during the Vietnam War.

Sergeant Pruden was leading a team of 6 when they came under heavy fire. Retreat was the only good option, but his team needed time to withdraw and dig in until evacuation was possible. Pruden single-handedly charged with such ferocity that he drew the enemy fire, and forced them to withdraw. Helicopters arrived to recover his team, but Pruden was mortally wounded. He was 20.