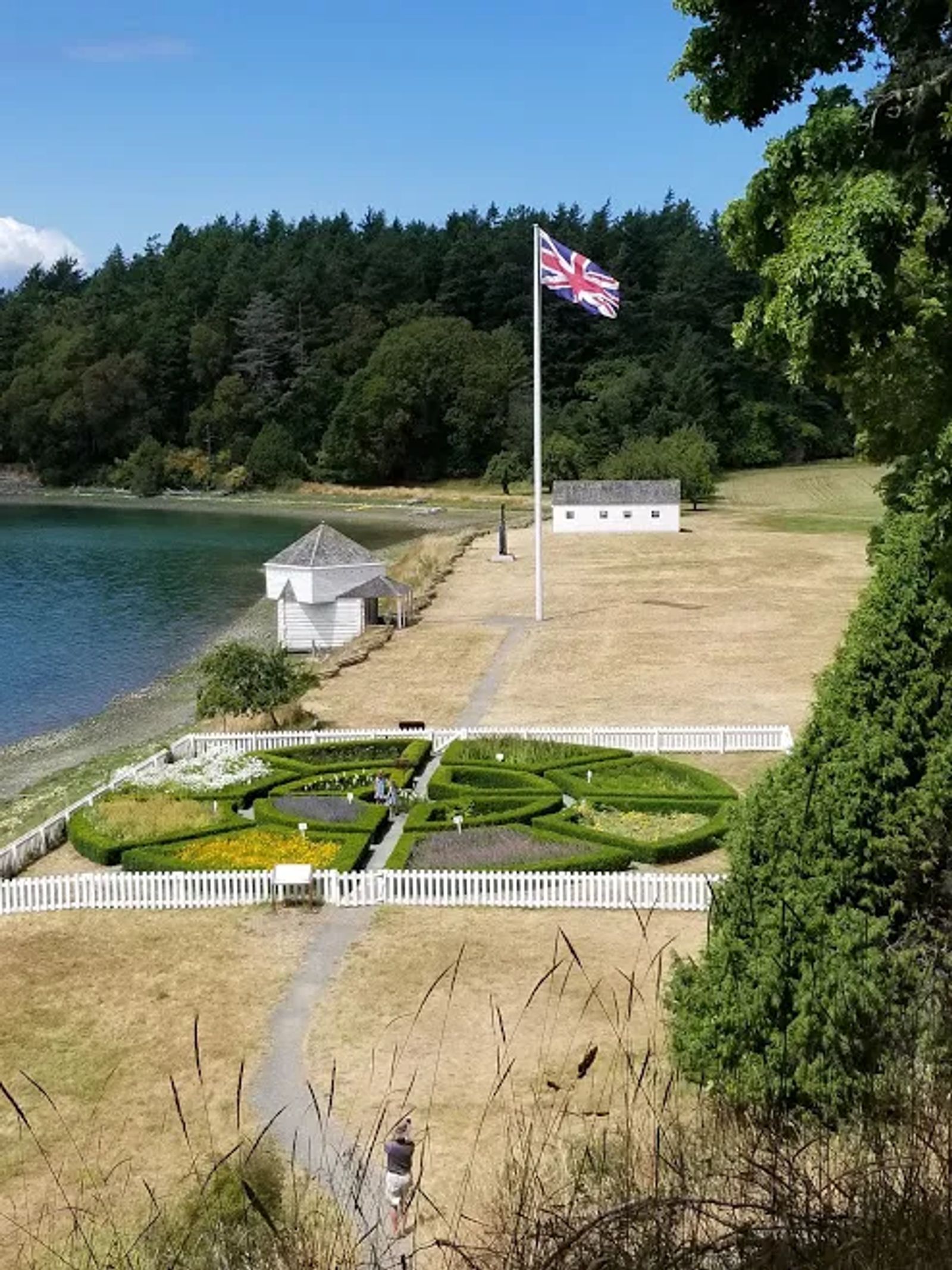 Location:  This 'hidden gem' is on San Juan Island, WA (see the  Clue Me! Map). It is a reminder of how the United States Army and the British Royal Navy came oh-so-close to bullets flying because of a pig and a few potatoes ...

It all started when the United States and Britain signed the Treaty of Oregon (1846) which established the 49th parallel as the boundary between the U.S. and Canada (a British colony at that time) in the Pacific Northwest. However, there's a big bite missing from Washington, because Britain kept Vancouver Island and a few small islands. But which ones? This was open to interpretation.

The border was located in the "middle of the channel which separates the continent from Vancouver’s Island; and thence southerly through the middle of the said channel, and of Fuca’s Straits to the Pacific Ocean."

The problem was that there are two "channels" between the continent and Vancouver Island ... the Haro Strait and the Rosario Strait. Ownership of San Juan Island and a few dozen other islands was therefore in dispute from day 1, but instead of officially resolving the issue, both the British and Americans decided to claim the islands by building settlements.

This worked for 13 years, until a pig got loose! The British put a farm with sheep and pigs on one end of San Juan Island. U.S. homesteaders settled on the other end. One day in 1859, a British landloping pig wandered ten miles and found tasty vittles in a U.S. farmer's potato patch. The farmer killed the pig (perhaps thinking that some sausage (i.e. bangers) would go nicely with some mashed potatoes). It was just one pig, but things quickly escalated. Pretty soon the U.S. camp had about 450 soldiers, and eight 32 pound cannons from the USS Massachusetts on the island. The British camp had 80 marines on the island and three warships ready for battle.

The American's were led by George Pickett (who would soon gain fame for Pickett's Charge in the U.S. Civil War). There was posturing, blustering, and shouting of insults, but cooler heads prevailed. Everyone calmed down and returned to the joint occupation for another 12 years. The British and U.S. soldiers on the island eventually became friends, often entertaining each other and feasting together (bangers and mash, anybody?). Finally, Prussian Kaiser Wilhelm I was commissioned to resolve the dispute, whereupon the San Juan islands were turned over to the United States.

In a show of friendship, goodwill, and no-hard-feelings, the U.S. proudly flies the British flag where the British camp was located.

The Union Jack's a flyin' proud in the middle of a U.S. National Park!

It's true. The British Flag is allowed to fly right here in the U.S. because of the Pig War (1859-1872), a territorial dispute between the United States and Britain (where a pig was the only casualty.) Eventually it was agreed that San Juan Island was property of the U.S. The British government gave us a flagpole and one of their flags, we agreed to fly it near the old pig pen to continue good relations (no more misunderstandings!) with our friends across the pond.