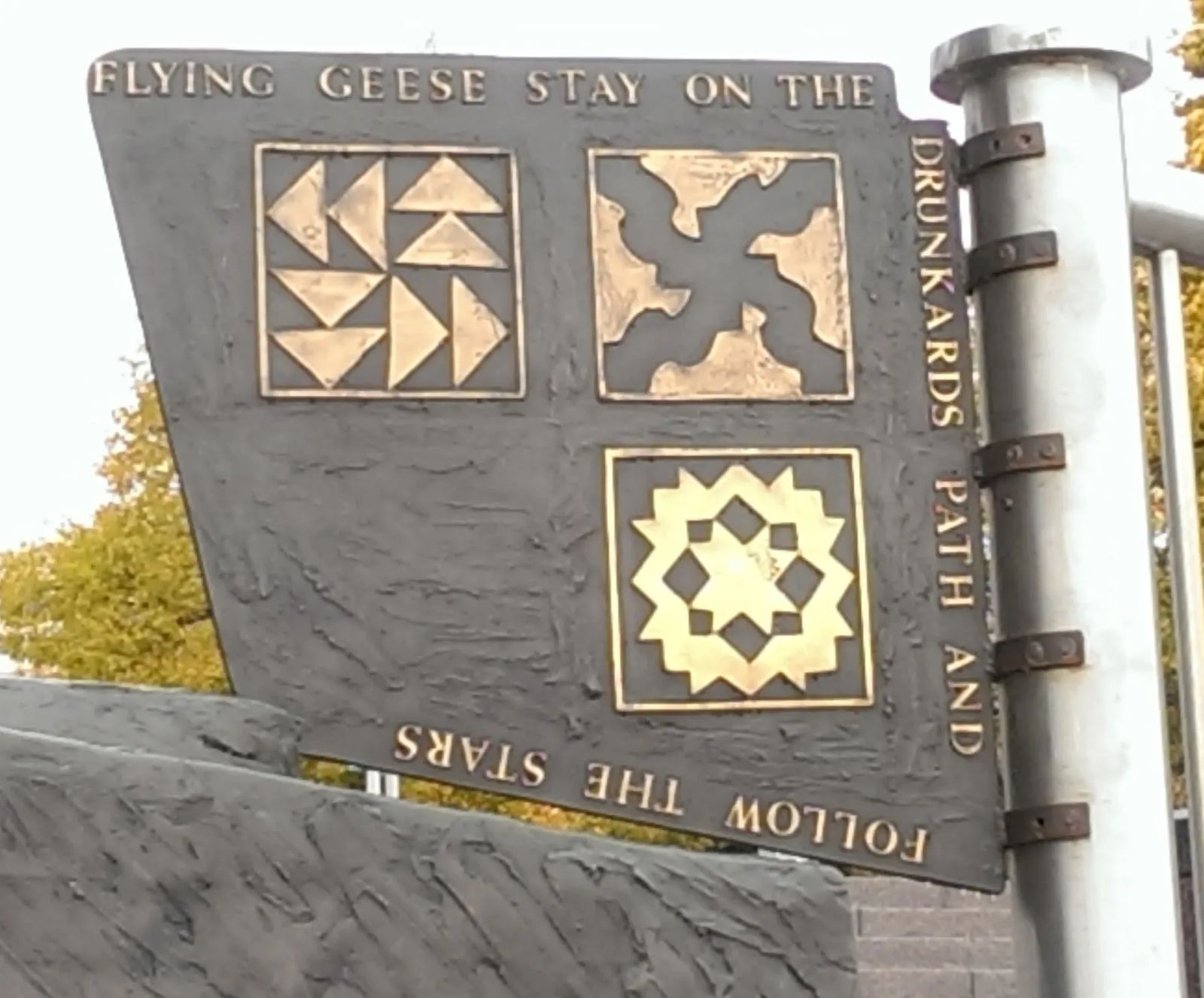 Location: This 'hidden gem' is on the Riverwalk in Detroit, MI (see the Clue Me! Map).  These designs and sayings frame the statue depicting a slave family that is about to cross the Detroit River, bound for Windsor, Canada, and freedom. With Detroit being the final stop on a major underground railroad line, this was a big moment. But how did the family manage to get here?

Consider the daunting journey they faced from the moment they slipped away from their ‘owners,’ with just the clothes on their backs. They were going to travel several hundred to a thousand miles. The first few hundred miles were through southern slave states, where their owners were looking for them, as were bounty hunters whose job was to find and return runaway slaves. The second few hundred were through northern states where it was illegal to help or harbor runaway slaves, and if caught by the wrong person, slaves would be returned to their owners. And of course, every day they had to find food and water while staying out of sight, and traveling mostly at night.

Many of us get lost crossing town. How did these people find their way across the country in the face of these obstacles?

The simple answer is the Underground Railroad, a well-organized system of stations, conductors, and trails, which were managed in part through secret communications that were plain to see and hear if you knew the code.

For example, there were songs that provided instructions, what to do right now (e.g. ‘stay hidden’ or ‘it’s safe, you can come out”) or instructions about landmarks to look for to keep on the right track. There is anecdotal description of ‘quilt codes,’ with symbols that provide instruction (possibly for slaves, possibly for conductors who were guiding slaves). And there were sayings that were easy to remember, and that would remind people about how to stay on track. Since they normally made their escape in the spring, they would go the same direction as migrating geese. At night they should “follow the drinking gourd,” a reminder to keep the North Star in front of them. The quilt codes may have provided simple reminders of these basic directions to people who were tired, scared, and hungry.

Henry Bibb was a slave in Kentucky, who described the beginnings of his successful escape:

“In the fall or winter of 1837 I formed a resolution that I would escape, if possible, to Canada, for my Liberty. I commenced from that hour making preparations for the dangerous experiment of breaking the chains that bound me as a slave. My preparation for this voyage consisted in the accumulation of a little money, perhaps not exceeding two dollars and fifty cents, and a suit which I had never been seen or known to wear before; this last was to avoid detection.

On the twenty-fifth of December, 1837, my long anticipated time had arrived when I was to put into operation my former resolution, which was to bolt for Liberty or consent to die a Slave. I acted upon the former, although I confess it to be one of the most self-defying acts of my whole life, to take leave of an affectionate wife, who stood before me on my departure, with dear little Frances in her arms, and with tears of sorrow in her eyes as she bid me a long farewell. It required all the moral courage that I was master of to suppress my feelings while taking leave of my little family.

Had Matilda known my intention at the time, it would not have been possible for me to have got away, and I might have this day been a slave. Not withstanding every inducement was held out to me to run away if I would be free, and the voice of liberty was thundering in my very soul, ‘Be free, oh, man! be free,’ I was struggling against a thousand obstacles which had clustered around my mind to bind my wounded spirit still in the dark prison of mental degradation. My strong attachments to friends and relatives, with all the love of home and birth-place which is so natural among the human family, twined about my heart and were hard to break away from. And withal, the fear of being killed, or captured and taken to the extreme South, to linger out my days in hopeless bondage on some cotton or sugar plantation, all combined to deter me. But I had count the cost, and was fully prepared to make the sacrifice. The time for fulfilling my pledge was then at hand. I must forsake friends and neighbors, wife and child, or consent to live and die a slave.

These kind friends gave me something to eat, and started me on my way to Canada, with a recommendation of a friend on my way. This was the commencement of what was called the under ground rail road to Canada. I walked with bold courage, trusting in the arm of Omnipotence; guided by the unchangeable North Star by night, and inspired by an elevated thought that I was fleeing from a land of slavery and oppression, bidding farewell to handcuffs, whips, thumb-screws and chains.

I travelled on until I had arrived at the place where I was directed to call on an Abolitionist, but I made no stop: so great were my fears of being pursued by the pro-slavery hunting dogs of the South. I prosecuted my journey vigorously for nearly forty-eight hours without food or rest, struggling against external difficulties such as no one can imagine who has never experienced the same: not knowing what moment I might be captured while travelling among strangers, through cold and fear, breasting the north winds, being thinly clad, pelted by the snow storms through the dark hours of the night, and not a house in which I could enter to shelter me from the storm.”

The sayings and codes that led slaves to freedom

How does someone, who maybe doesn't read or write, walk 500 or 1000 miles, at night, through enemy territory, while being hunted all the while? They needed help instructions and reminders, which were hidden in plain sight.