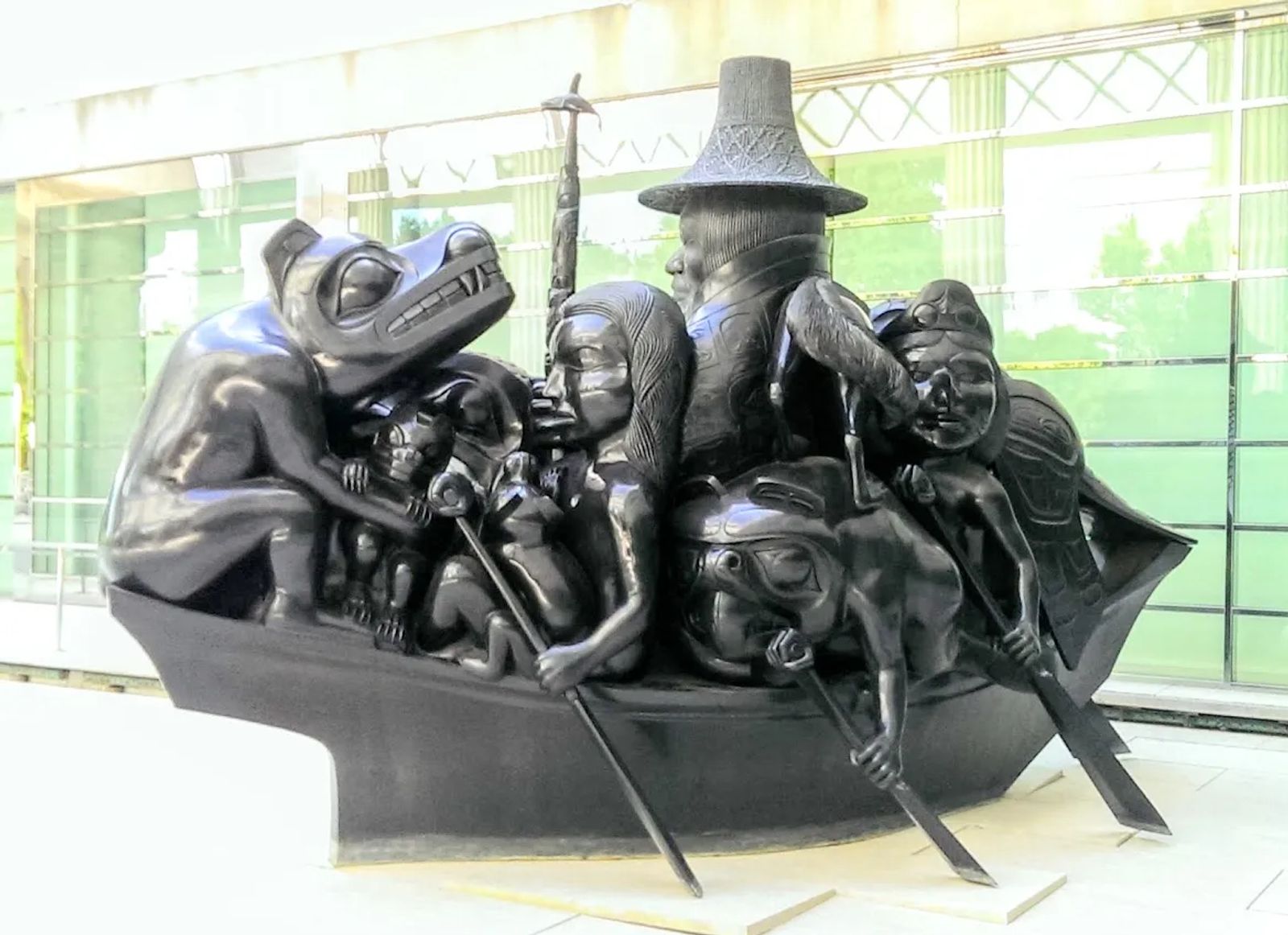 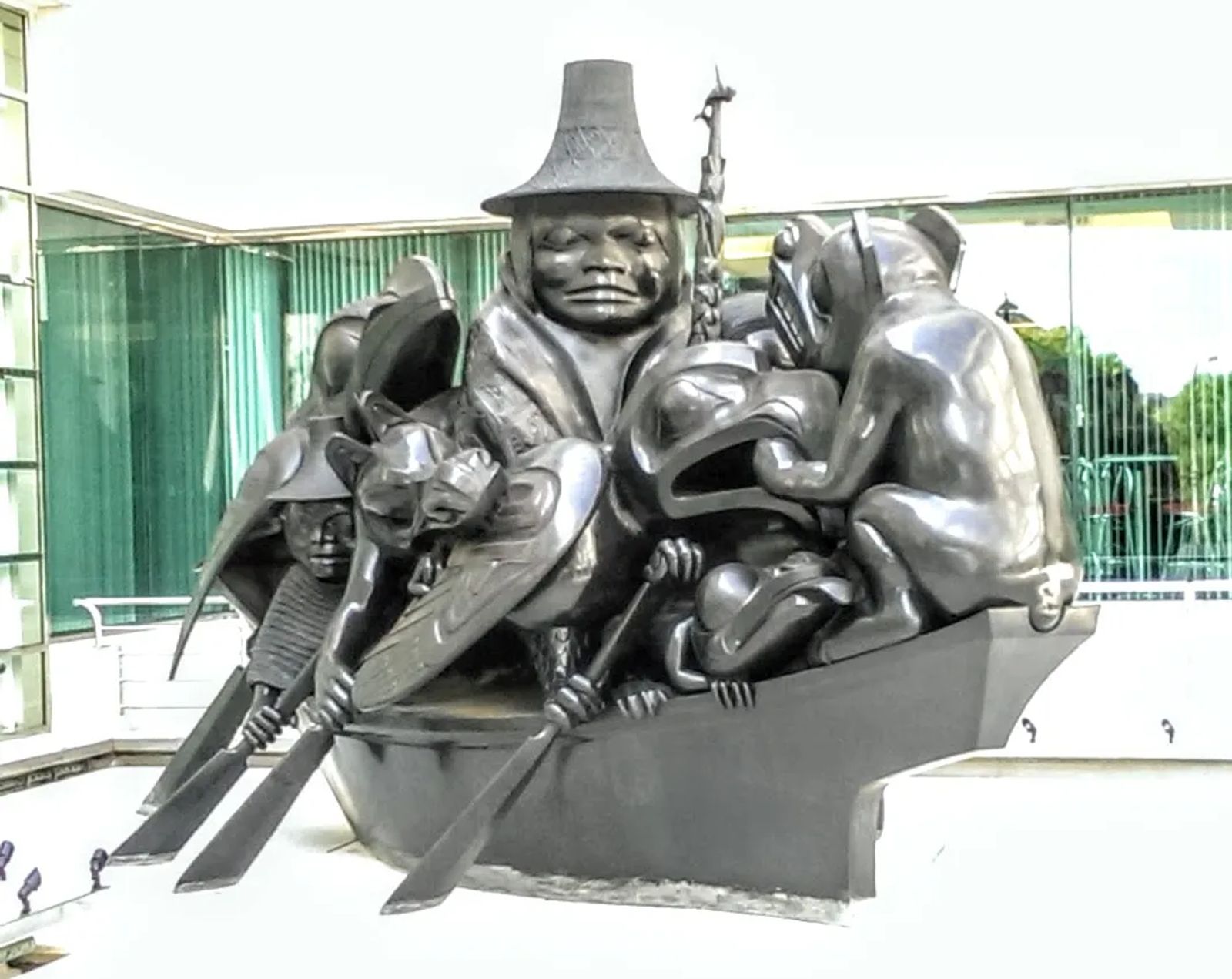 Location: This hidden gem is located at the Canadian Embassy in Washington, DC (see the Clue Me! Map).

“The Spirit of Haida Gwaii” is fascinating art, unique and full of surprises. And apparently, no matter how different we may seem, we’re all in the same boat.

The Haida people are Native Americans, their home being the archipelago just west of the Canadian mainland, and just south of Alaska’s panhandle (originally extending into the Alaskan islands as well). Haida Gwaii is the name of the Haida Homeland. The Haida are themselves unique: Historically a matriarchy, their language is an “isolate” language (unrelated to any other, and no common ancestral language with any other), their mythology intricate and the foundation of wonderful stories.

At first glance, this canoe is full to overflowing with travelers who are cooperating to reach their destination (hopefully without getting wet!). But, knowing these individuals as we do, we suspect that they may see unexpected twists and turns, including a possible tipping, before their journey ends (wherever that may be).

Grizzly bear, in front, but eyes fixed firmly in the past.

On the left side of the canoe we have:

* Bear Mother, Grizzly’s human wife, sits just behind him, paddling hard and looking to the future. Their children, Good Bear and Bad Bear, are between them. These three wandered in from another myth altogether.

* Beaver is paddling just behind Bear Mother. Whose claws are those, gripping Beaver’s back?

* Paddling behind Beaver is Dogfish Woman, mysterious, aloof, and inward-looking.

The right is a bit of a mess

* Frog is just behind Grizzly, the intermediary between land and sea.

* Rowing behind Frog is Eagle. But how hard is he rowing, while also chomping on Grizzly’s left arm? And while also being chomped upon ...

* Rowing behind Eagle is Wolf, “helping” and disrupting at the same time. That’s just his nature. Those were his claws digging into Beaver’s hide, and those are his fangs, embedded in Eagle’s wing.

* Rowing behind Wolf is the Ancient Reluctant Conscript, the human who simply gets things done, little noticed, little reward. But he always seems to be there to pick up the pieces.

The middle is a study in contrast.

* The Man, placidly riding to wherever they’re going. Being a shaman, perhaps he’s in control. Being content, perhaps he's not.

* Hidden behind the Man is Mouse Woman, who lost her place in her own myth, and barely squeezed into this boat.

* And in the rear, manning the steering oar, is Raven, the trickster. With Raven driving, the destination is anyone’s guess.

A boatload of fun

The statue of Haida characters

The boat represents the natural environment in which the Haida lived, the passengers with different goals and natures, heading in different directions, yet they depend on one another to survive and thrive.