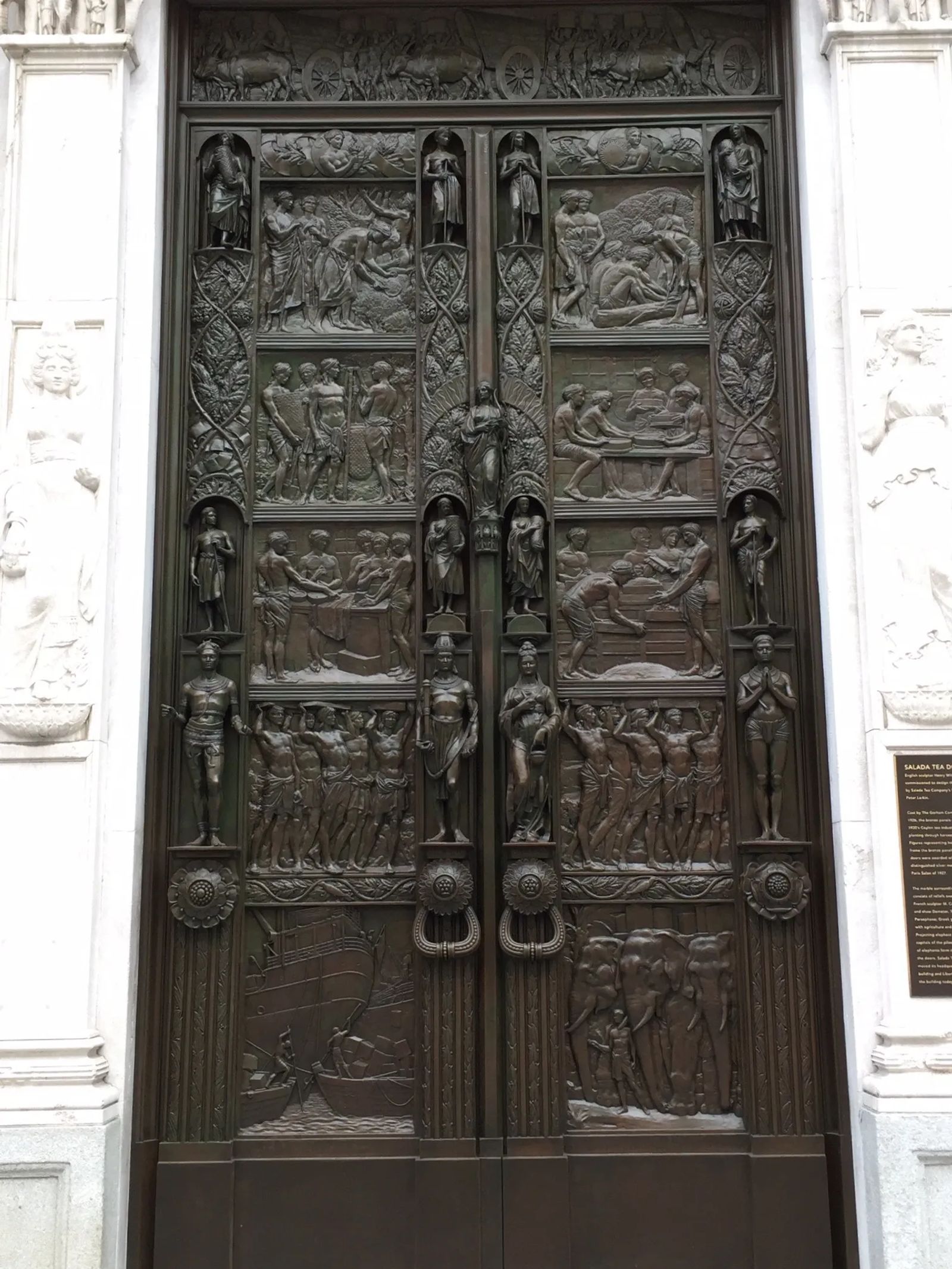 Location:  This hidden gem is located near the intersection of Stuart St. and Columbus Ave., in downtown Boston, MA (see the Clue Me! Map ). Peter Larkin, founder of the Salada Tea Company, had a great appreciation for the arts (one example being the commissioning of these intricate sculptures that doubled as doors), and was a very creative individual in his own right.

The United States can be thankful that one of his creative moments didn't happen sooner than it did. Specifically, look at the doors in the photo and check out the third panel on the right. People in India have harvested and dried their tea, filled wooden crates with loose leaf tea, and are now loading those crates onto sailing vessels ... but something is being lost in the transportation. Something called flavor. Loose leaf tea is greatly impacted by heat and cold, humidity or lack thereof, general exposure to air and the elements. Larkin's brainchild was the first tea bag ... not the flow-through bag for steeping, but the foil bag for sealing in the quality and sealing out the elements. Peter Larkin's Salada tea bags revolutionized tea shipping and storage.

What does that have to do with US? Well, in 1773, three vessels such as those depicted on these doors were moored just a few blocks east of these doors. The Beaver, the Dartmouth, and the Eleanor had arrived, laden with crates of loose leafe tea. Bostonians refused to allow the tea to come ashore. British refused to leave before unloading the tea.

Impasse. But it was about to be 'broken.' British warships were also on hand, and the British promised that on Dec. 17 they would unload those ships, under cover of cannon fire if necessary.

Consider which of the following "Tea Parties" would be most likely to galvanize revolutionaries.

Option one. Bostonians, disguised as Mohawks, and carrying axes and clubs, rush the three ships. They gain entrance to the cargo holds, enthusiastically chopping open every single crate, dumping loose tea and crates into the harbor. The tea, and more importantly the revenue to the British Crown, settle to the bottom of Boston Harbor. The scrappy demonstrators return home, hailed as heroes who, under great risk to life and limb, thumbed their noses at the Crown while right under the guns of British warships!

Option two. Bostonians, disguised as tailors, and carrying scissors, rush the three ships. They gain entrance to the cargo holds, enthusiastically snipping foil bag after foil bag. Before long they are covered with a confetti-like mix of foil strips and tea leaves. While some tea makes it into the harbor, this is taking too long. The invaders dejectedly head home, leaving a trail of foil strips (along with chuckling Red Coats and embarrassed revolutionaries) in their wake.

Watch for the elephants hauling crates of tea leaves

Salada Tea founder Peter C. Larkin invented the tea bag to give customers a more consistent tea drinking experience. These huge bronze doors, which weigh approximately two tons, hold ten panels in bas-relief, five on each side. They depict every step of the process of growing, harvesting, and shipping tea in Ceylon. The panels are flanked by two vertical rows of small figures in high relief. On the frames between the panels are designs of tea leaves and tea berries.