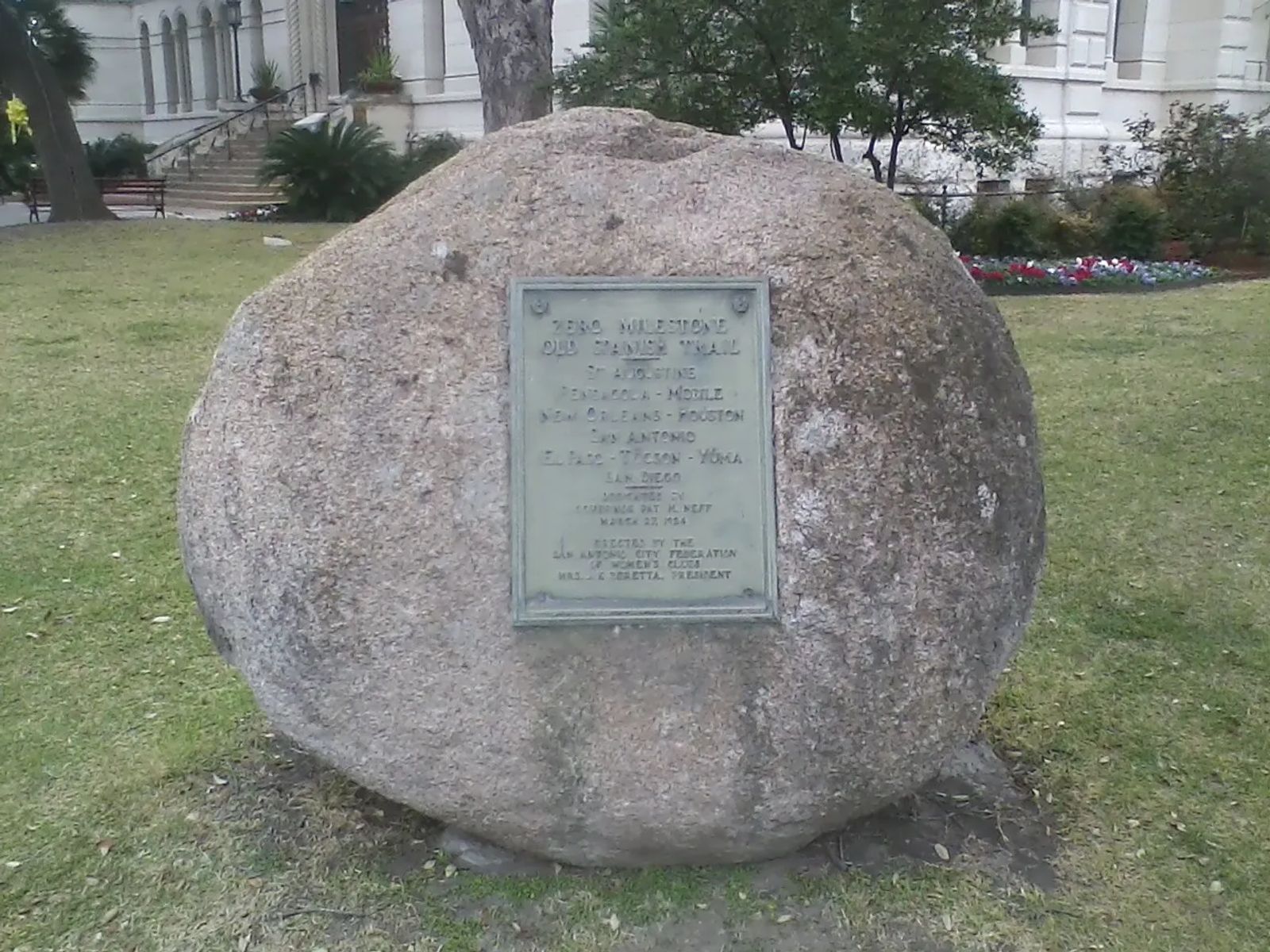 Location:  This 'hidden gem' is located on the City Hall lawn, near the intersection of Military Plaza and West Commerce Street, in San Antonio, TX (see Clue Me! Map).  At first glance, it looks like a big, round, rock, that sticks out like a sore thumb. On second glance, that's exactly what it is. A big rock, selected to stand out, and placed where you can't miss it. Now you're curious. You step closer to read the plaque.

If so, you would be wrong on both counts.

Count the first. The "Old Spanish Trail." There are two Old Spanish Trails. One is a National Historic Trail, and runs from Santa Fe to LA. When this rock was placed, that trail was old, having been well used in the early 1800's as the main supply route from CA to New Mexico, and even Utah, during the winter.

This rock was placed in the early 1900's as a marker on what was at that time a brand new "Old Spanish Trail." The new trail was a highway from St. Augustine to San Diego.  The highway didn't even touch the original Old Spanish Trail, staying far to the south. In reality, the naming of the highway was simply a marketing tactic. There was a desire to get those newfangled contraptions, those horseless carriages, to travel across the country. By naming the new highway the Old Spanish Trail, it was hoped that a sense of adventure and romance would be a lure.

Count the second. The "Zero Milestone." When the Old Spanish Trail highway was completed, automobiles were new, and a lot of their parts worked less perfectly than today. Case in point, the odometer, which counted miles imprecisely. For example, your car says you've gone 100 miles, but you've gone 117. Back then, the highway was passing through extremely unpopulated, uncivilized territory. It wouldn't do to run out of gas, or miss a turn.

To make life easier for travelers, ten "zero milestones" were placed on the Old Spanish Trail highway. Each time a car reached one of these milestones, the driver adjusted their odometer to zero. This allowed them to correct the error that had built up, and also note how far they were off so they could compensate as the need arose.

A rock. Pretty big. Hard to miss if you're looking for it.

The Zero Milestone rock of the Old Spanish Trail

This milestone is for a highway that was named the Old Spanish Trail, and established in the early 20th century as a southern route across the U.S. from St. Augustine, Florida to San Diego, California. The 'true' zero milestone was in St. Augustine at the beginning of the highway. The zero milestones in different states were there so drivers could reset their odometers. Odometers were inaccurate in the early days, and resetting them kept drivers from getting too far off track on long drives.