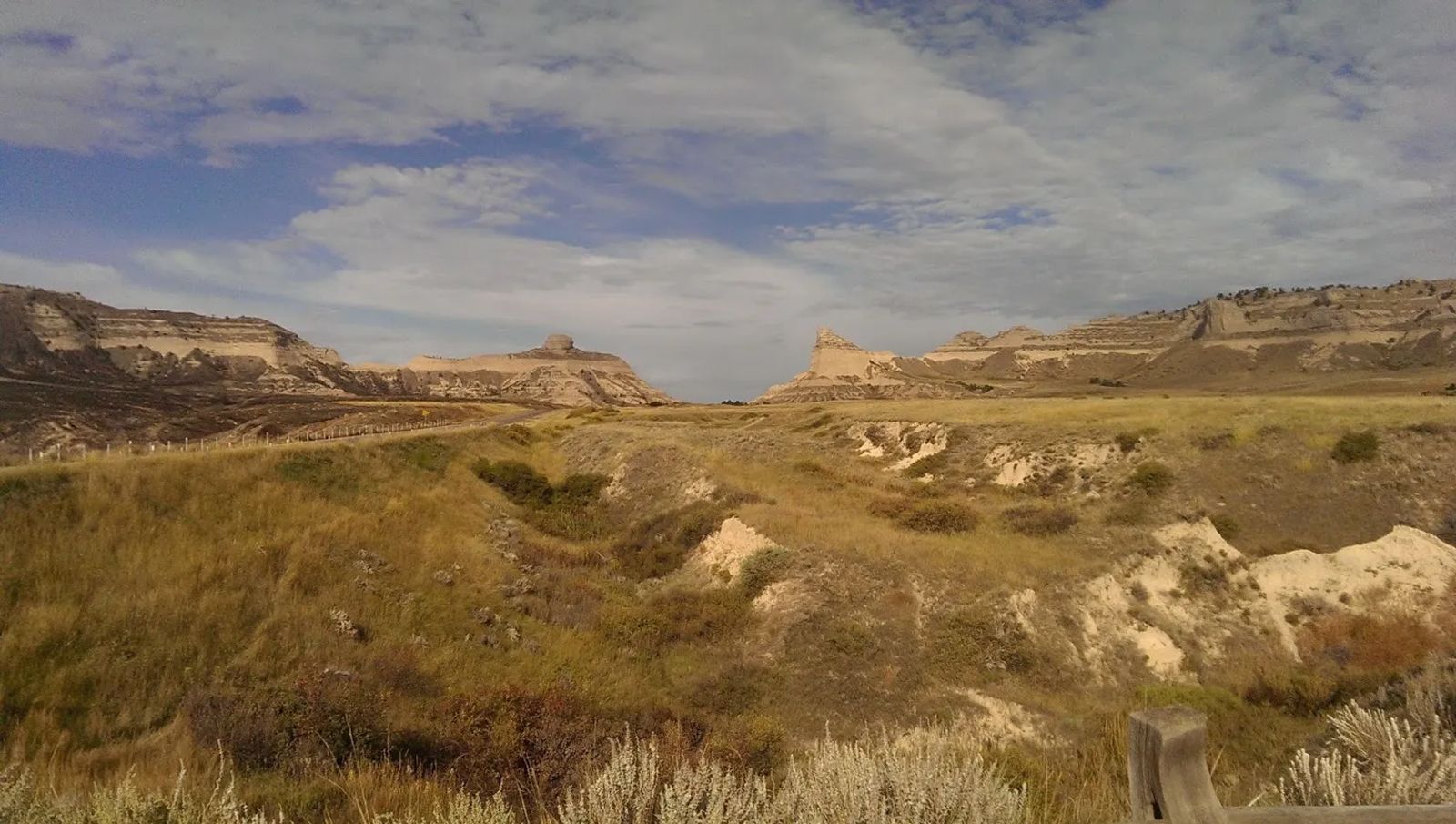 Location: This hidden gem is located about a mile east of that gap you see in the distance, on the eastern edge of Scotts Bluff National Monument, in Gering, Nebraska (see the Clue Me! Map).  For pioneers heading west, water, more than anything else, dictated their route. The water they followed through most of Nebraska and Wyoming was the Platte River and its tributaries (i.e. the North Platte and the Sweetwater Rivers).

This was fine and good until you reach Scotts Bluff, which forced wagons to turn inland for a long and difficult detour that took them much too far from the river.

The gap shown in the photo is not the route they took in the early years. This gap is called Mitchell Pass, and although it appears to be passable from this eastern side, as soon as you reach the top, there are deep gullies that no wagon could hope to cross. It was only after several years of the long route that some people said ‘enough is enough.’ They worked out a winding path that wagons could follow through the pass and down the other side while remaining mostly intact. From then on, the Oregon Trail ran through Mitchell Pass.

This location is one of the best illustrations of how “The Oregon Trail” was actually many trails running parallel to one another. In the photo, you can see several gullies on each side of the road, each of which is a remnant of the ruts from hundreds or thousands of wagons. In other words, at least seven ‘trails’ are easily visible. All of these merge together at the top, stay together as they follow the one viable path through the pass, and then split apart again on the other side.

So, you’ve managed to get your wagons, animals, and people up the east side and down the west side in one piece. You think there might be some easy riding for a while? Sorry, pardner. It’s uphill from here to South Pass, 350 miles up the trail in Wyoming.

First, this gap between the north and south portions of Scott's Bluff funneled all the wagons (which otherwise picked their own paths) into a narrow space. The wagon ruts created the gulleys, which come together at the top. It's really cool to walk in the exact paths of the pioneers! Second, if not for this tiny gap, the path would have been much more arduous. Either cross the river and cross back later, or take a really long detour around the south Bluff.