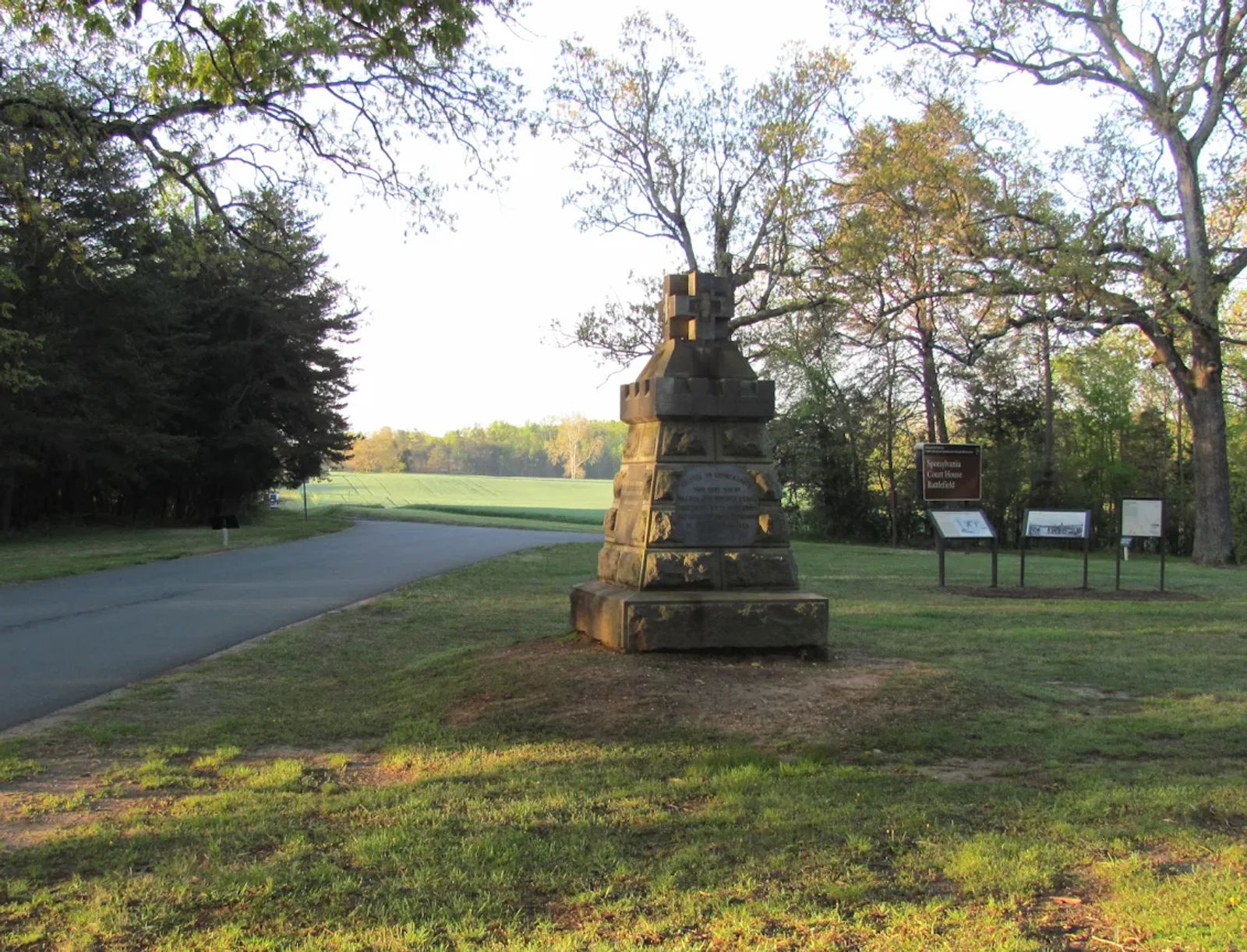 Location: This 'hidden gem' is just northwest of Spotsylvania, Virginia, within the area of the Spotsylvania Courthouse Battlefield of the Civil War (see Clue Me! map).

General John Sedgwick was one of those officers who was truly loved by his soldiers. He had a wonderful capacity to joke and banter during the long and arduous marches, and then get right into the thick of if to support his boys during battle. He was also known for his courage, seemingly unconcerned about danger in spite of being seriously wounded several times.  In the Mexican American War, a fellow officer said that "Sedgwick is the coolest man under fire I ever saw."  He then recounted the following:

"In forcing our way from Chapultepec, I was engaged in demolishing buildings to form a passage for our troops: Sedgwick came with orders from Worth to move the around by the street.  I replied that none could live in the face of the batteries that swept that street.  Sedgwick coolly rode to the centre of the street, amid the hail of shot and shell, raised his glass and viewed the batteries; returning said: 'you are correct, Colonel; go on your own way.' "

His long career and many battles before and during the Civil War were recounted in 1880 by his former Chief of Staff, General Martin T. McMahon. Two excerpts that illustrate his style and humor, and with at least two twists of irony, follow. (Additional historical accounts are included in the dedication of his monument at Spottsylvania).

"The troops of the Corps, owing to the long and trying marches which they had been compelled to make, acquired the habit of calling themselves "Sedgwick’s foot cavalry," and maintained that they were kept on the gallop all the time. It was a joke among them that Sedgwick never stopped until his horse gave out, and on one occasion, in Virginia, when he had dismounted by the road side and stood on a little bank leaning on the fence watching the troops as they went by, men in the ranks constantly called out, "Come on, we’ll wait for you. Get another horse; we are in no hurry. " …

Once he understood the joke, he laughed and his men cheered.

At Antietam, Sedgwick was wounded through the leg and the wrist but refused to leave the desperate battle. After being wounded a third time, he lost consciousness and was carried from the field. He returned to duty before he was fully recovered, and:

Referring to the pain and annoyance of his wounds he once said laughingly: "if I am ever hit again I hope it will settle me at once. I want no more wounds.”

The General John Sedgwick monument in Spotsylvania Battlefield marks the spot where Sedgwick was shot and killed. He was the highest ranking Union casualty of the Civil War.

Sedgwick was one of the North's most respected and popular generals. On May 8, 1864 Confederate sharpshooter fire, from over 1000 yards away, had been harassing his troops. Sedgwick dismissed the danger. A soldier warned: "General...there is a sharpshooter over there and he might hit you." Sedgwick replied "you must not mind that fellow; he couldn't hit an elephant from that distance." Moments later the whistle of a bullet pierced the air, followed by a "dull, heavy stroke." Sedgwick fell dead.﻿