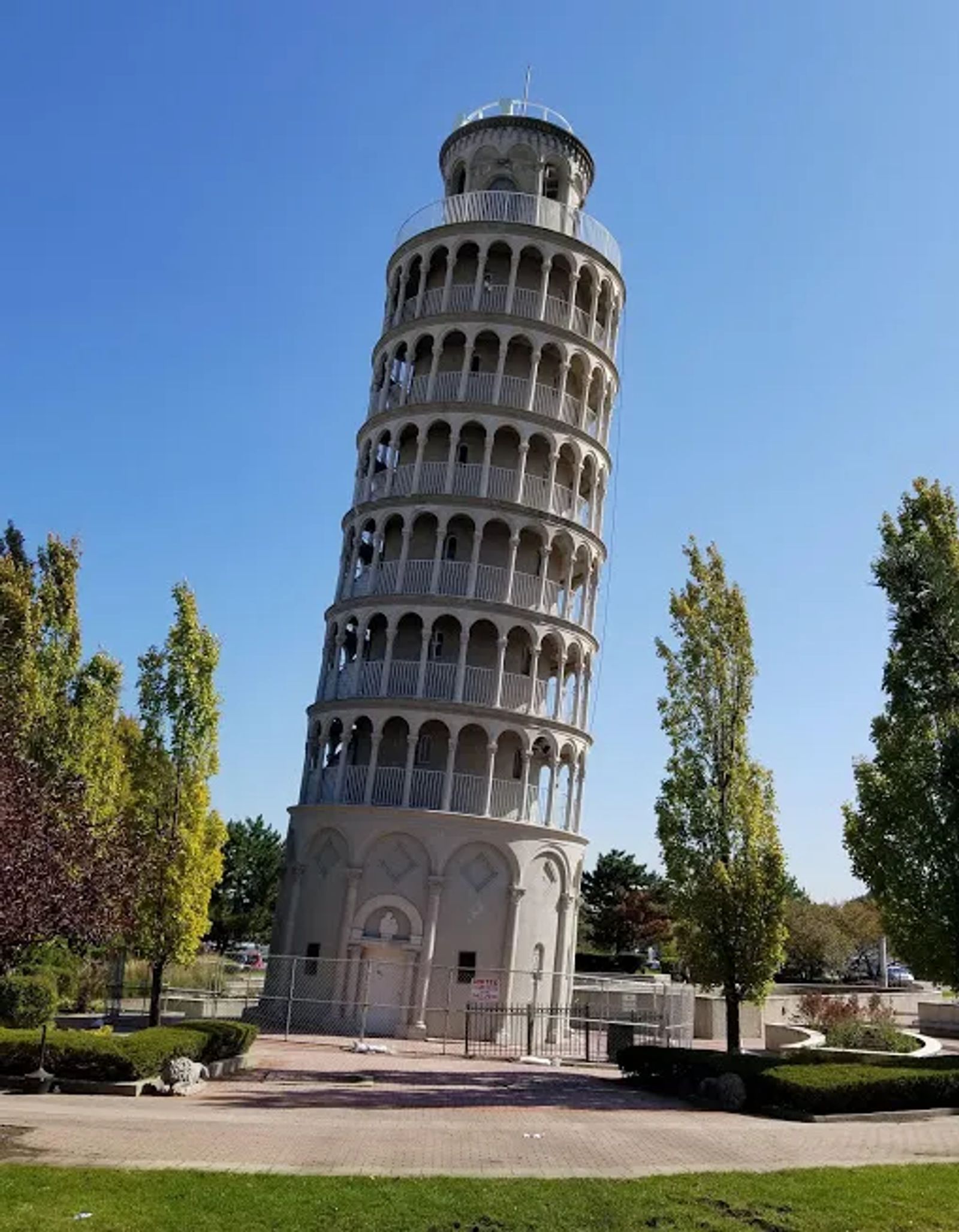 Weekly Gem #216 A Smidge Off Plumb

Location: Located at the intersection Touhy Ave and N Mobile Ave in Niles, Illinois (see the Clue Me! Map),  this hidden gem is a water tower in disguise!

The Leaning Tower of Niles is half as big as the 'original' leaning tower in Pisa, Italy. The tower you see here is merely a decorative cover to a fully functional water tower. Robert Ilg owned an air conditioner company next door. Determined to build two public swimming pools, Ilg needed a water tower. Determined to have a more pleasing view than your standard water tower, he needed a disguise. We don’t know how he settled on the Leaning Tower of Pisa replica, but it certainly is one of the most creative water towers you’ll see.

Now for a digression. It’s plumb interesting how Italian influences have seeped into this post. Starting with the leaning tower itself, a replica of the original in Pisa, Italy. But there’s also the Latin word “plumbum,” their name for the heavy metal we call lead (thus the Pb in the periodic table).

A smidge off plumb. This derives from “plumb bob,” which is a string or rope with a lead weight tied at one end. Lead is so heavy is pulls the string straight down and doesn’t blow in the wind. Therefore, a plumb bob was used in the old days to test whether a structure is perfectly vertical. ‘Off plumb’ means it is leaning.

The water tower (obviously) incorporates plumbing. Plumbing became a ‘thing’ back in the Roman Empire, made practical because Romans discovered plumbum was great for sealing pipes. The metal was soft enough to easily liquify when hot, then harden quickly when cooled. It was most excellent for plugging leaks. Unfortunately, lead got into their drinking water, so the Romans were poisoning themselves with this particular innovation.

"This is plumb interesting" uses this particular word, but as far as we know, has nothing to do with Italy.

A Smidge off Plumb

The Leaning Tower of Niles

This replica of the Leaning Tower of Pisa is about 1/2 the size of the original. It is a cover for a small water tower. The water tower was originally used for two public swimming pools and a recreational park built next to it. These were built in 1934 by Robert Ilg for employees of the Ilg Hot Air Electric Ventilating Company of Chicago. The Tower and park have since been renovated.