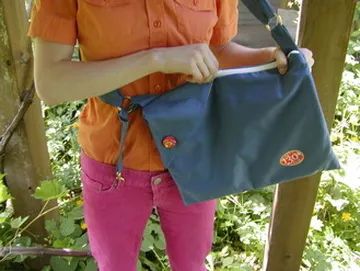 Pickpocketing is rampant, and we're on a mission to protect travelers from this vacation-wrecking plague.  To complement our Pickpocket Repellent series, we’re launching a new series of posts called “Pickpockets won, travelers zero.”  We'll share real pickpocketing examples in order to show how easily even the most careful people can lose their good stuff, and explain how we've designed our security satchels to block these common techniques.  Time to make pickpockets fail, and travelers smile!

One reason pickpocketing victims are often shocked to find that they've become a stat is that they didn’t expect pickpockets in the place where the extraction occurred.  First step to slowing the rip (off) tide is to recognize that Pickpockets Are Everywhere!  This is not just a Rome or Paris or London problem.  Case in point, Episode 1, A Christmas dance.

Our victim.  A woman, accompanied by a man, shopping for clothing.

A ‘filch’ of pickpockets ( as defined in ingredient #5 ) enters the store.  The filch is comprised of three women, who appear to do exactly what our victims expect.  They shop.  They do so enthusiastically, setting an expectation of enthusiasm ... setting up the distraction technique that they used to get right up against the victim.  Additionally, one pickpocket enters the ‘space’ of the victim twice.  Doing so the first time actually lowers the barrier to entry the second time, so she can get close without causing alarm.  The second time, she enters the space while distracting the victim’s attention by talking to her ‘friend’ about clothes.  During the conversation, she extracts the victim’s phone or wallet while using the ‘pullover’ to cover the purse.

All the while, the victim’s better half is looking in the general direction of the pickpocket, and even has his hand right next to, and maybe touching, the purse!

Looks like somebody will have extra Christmas gifts after all!  (Which is definitely worth a little jig on the way out.)

This could have been prevented using our Tranquility pickpocket-proof satchel, or some other equally effective security satchel.  Specifically coming into play are our protection levels 1, 2, 3, and 7 , which you can see if you click the Tranquility icon.

1.  Zip the zipper and button the flap.

2.  Put valuables in the security pocket, which is lower and hidden from view.

3.  Zip the security pocket, (taking advantage of the reversed zipper orientation with the Tranquility satchel).

4.  "Secure your tether" to keep you satchel in front of your body … the only reason this theft worked so easily is that the victim allowed her purse to slide onto her back, out of her view, and also hidden from her companion during the crucial seconds.